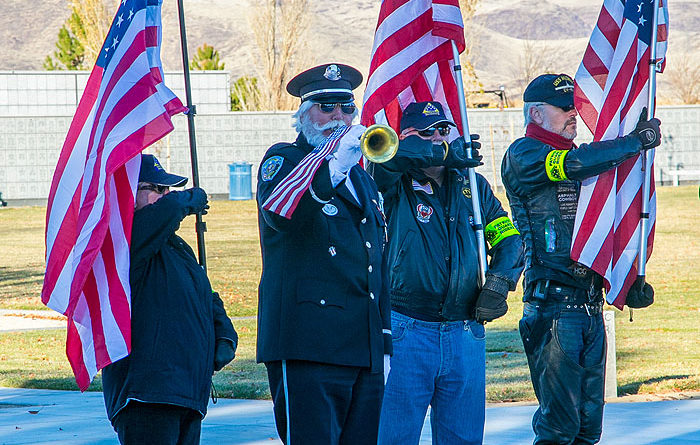 The men and women who serve on the field of battle depend on one another, through life and death.

Unfortunately, some of those same men and women aren’t given the same reverence back at home.

Many of them are forgotten altogether.

For 16 veterans, the Nevada Veterans Coalition made amends Nov. 17.

“As a Navy veteran, we’re well trained that we’re brothers and sisters in arms,” Grimes said. “In the heat of battle, no one is left behind.”

The remains of the 16 veterans, and one veterans spouse, had been unclaimed in several funeral homes, before the Missing in America Project made the effort to identify them and give them the honor and respect they deserve.

“We’re finding that a lot of veterans get left in the basement in funeral homes,” Nevada State MIAP chaplain Jim Ingland said. “For these 16 veterans it’s going to be their final resting place. This is a heartfelt time for all of us.”

Grimes said 7 only percent of the population has ever donned the uniform to serve and protect the other 93 percent.

“As a nation, we should never forget what that 7 percent has done,” he said. “We promise never to forget them, in life or in death. Though we didn’t know them personally, they are part of our extended family – our family of veterans.”

Fernley Municipal Court Judge Lori Matheus, mother of U. S. Army Sgt. E4 Zach Matheus, received the flag in honor of the U.S. Army veterans, while the flag on behalf of the Navy veterans was presented to Biancha Salzbury, mother of Eithan Pacheco, who is actively serving in the U.S. Navy.

As each name was read a bell was tolled, and following the presentation of the flags, the veterans were honored with the Volley of Three.

The remains were then carried to the wall, where they were placed to rest.

“Today we have the privilege to thank and honor them for their service,” Draughon said.

The veterans who were honored were: