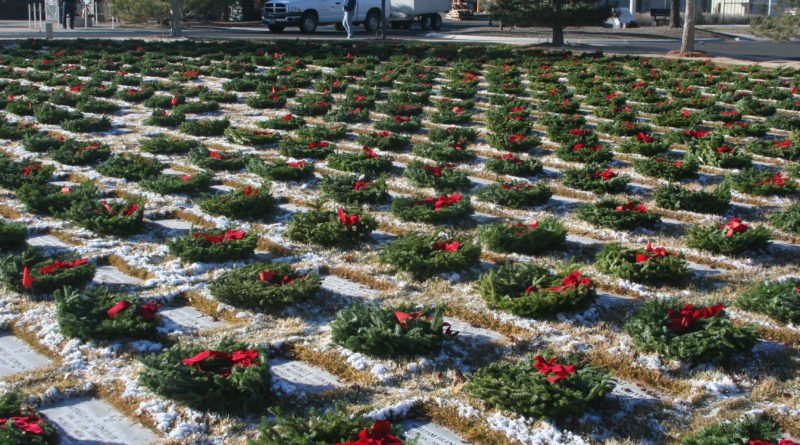 The call for wreaths to decorate veterans’ graves in December is being made for the Northern Nevada Veterans Memorial Cemetery in Fernley.

Every year on the third Saturday of December at 9 a.m., the Nevada Veterans Coalition and volunteers will place about 8,000 wreaths on the gravesites and at the columbarium. This year’ ceremony is slated for Dec. 15 at Fernley.

The Wreaths Across America is a nationwide remembrance conducted in 50 states, U.S. territories and other countries where servicemen and women are interred. The day was developed in the early 1990s to thank veterans for preserving the American way of life.

Tom Draughon, who serves as master of ceremonies for the NVC, said the event begins at 9 a.m. and the placement of the Christmas wreaths occurs afterward. The early start in the West coincides with the ceremony at noon at the Arlington National Ceremony, which is across the Potomac River from Washington, D.C.

The wreaths are placed at each veteran’s headstone or along the columbarium each year through the work of organizations and the public who wish to attend. Draughon said the NVC wants to have enough wreaths to honor each veteran.

Draughon said applications to donate to the annual fundraiser are coming in every day, two months before the event.

“We still have a ways to go,” Draughon added.

Brett Palmer, president of the NVC, said Wreaths Across America is to honor veterans by paying them for back for the times they were away from family during the holiday or special events.

“Veterans sacrifice all the time with their service,” he said. “We should be honoring them every day.”

Prior to the wreaths being placed on the gravesites, Draughon said the ceremony recognizes each branch of military service when either a cadet from the Civil Air Patrol or the U.S. Naval Sea Cadet Corps accompanies a veteran from that branch of service to a remembrance wreath at a medallion. During previous years, Naval Air Station Fallon sailors as well as soldiers and airmen from the Nevada National Guard and other groups assist the NVC.

Draughon said Wreaths Across America is the second most important veterans’ ceremony after Memorial Day.

For the Fernley ceremony, order a wreath by going to nnvc.org and click on Wreaths Across America for the pdf form, or mail your donation to:

Every penny received goes to the purchase of a wreath. The price is $15 per wreath.

One thought on “Veterans cemetery needs donations for wreaths”