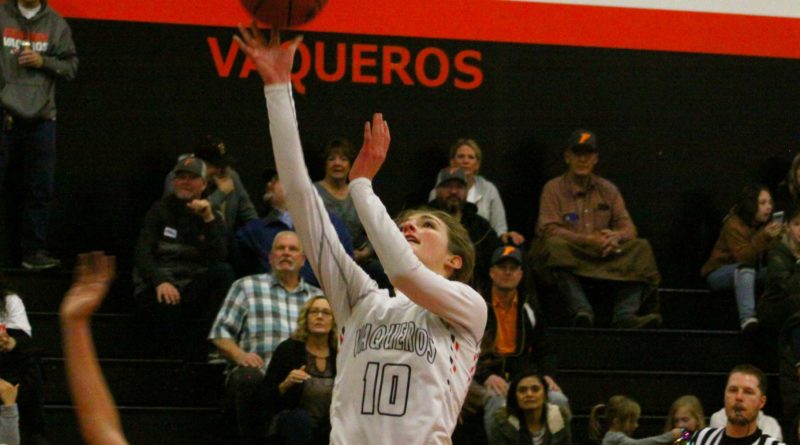 Only one game remains between the Fernley High School girls basketball team and a perfect season in the Northern 3A.

After beating Sparks and Truckee last week, the Vaqueros will play at South Tahoe Tuesday night in their last regular season game of the year, with a chance to finish 18-0 in league play.

The Vaqueros eased past Sparks last Tuesday, with their bench players getting plenty of time on the court.

Willow Jacobson score 16 points to help stake the Vaqueros to an early lead. After an 8-2 advantage after one quarter, the Vaqueros stretched that out to 28-6 at the half. The outscored Sparks 21-5 in the third quarter, prompting the running clock the rest of the way, and neither team scored in the fourth quarter.

At Truckee Saturday, the Vaqueros took control of the game early, despite having a couple of players who were a little under the weather. They led 16-9 after one quarter and 35-19 at the half, and spent the rest of the night protecting their lead,

“Our girls started off really well, even though we have a couple that were not feeling well,” coach Tom Kingston said. “The fight, the resilience and just going out and wanting to compete, I’m extremely happy for this team and it’s really exciting to be able to share the moments with them.”

Jacobson and Karli Burns each scored 10 points to lead the Vaqueros, who got a balanced attack. Jaiden Sullivan added 9, Alizah Lara and Bunyard both scored 8 and Condie added 7.

The Vaqueros have already clinched the No. 1 seed for the Northern 3A Region Tournament in Fallon.