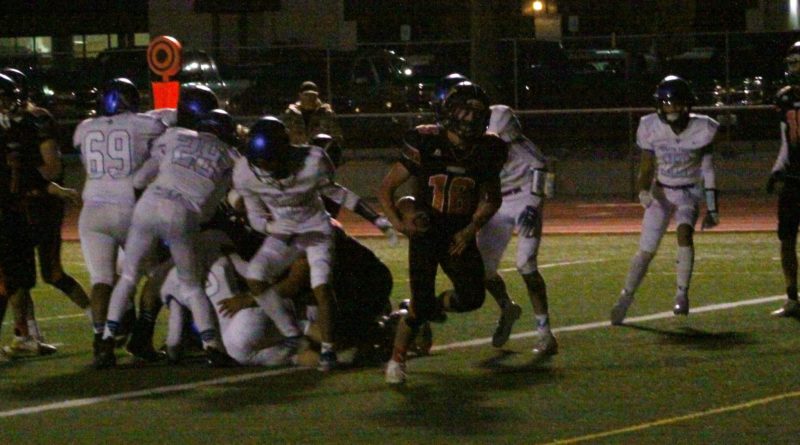 Consecutive losses at Fallon and Lowry left the Fernley High School football team in jeopardy of having to scramble just to make the Northern 3A playoffs.

A blowout over South Tahoe last Friday, and the league’s competitive balance, have thrust them right back into the race for a home playoff game.

The Vaqueros responded to those back-to-back losses with a 51-14 win over South Tahoe last Friday night to even their league record at 2-2. With second-place Elko coming to town Friday night, the Vaqueros have a chance to further throw the league’s playoff chase into chaos.

The win moved the Vaqueros into a tie for fourth place with Truckee at 2-2. Fallon lead’s the league at 4-0, while Elko is second at 3-0 and Lowry is third at 3-1.

But Elko has yet to play one of the current top six teams in the league, and must still prove where it fits in the league hierarchy. The Indians’ league wins have come over South Tahoe, North Valleys and Sparks, the league’s bottom three teams, and the wins over North Tahoe and Sparks were by two points each.

A win by the Vaqueros this week would throw the playoff chase, behind Fallon, wide open, and create the possibility that a team with two league losses could win the No. 2 seed.

None of that mattered to Fernley coach Chris Ward before last Friday’s matchup with South Tahoe. Ward didn’t feel like the Vaqueros were ready to play in the first half of either of their two losses to Fallon or Lowry.

With touchdowns on their first four possessions, the Vaqueros answered Ward’s call to make sure that didn’t happen again.

“Our kids came ready to play tonight, and it was good to see,” Ward said. “It was our goal throughout the week to start fast, and I think they did start fast and continue it through the game.”

The Vaqueros took the opening drive of the game 51 yards in seven plays for the game’s first touchdown, a 2-yard score by Miles Steele.

Steele, who ran 14 times for 221 yards and three touchdowns, set the tone on the first play of the game with a 17-yard run on an option keeper. His second touchdown came on a 66-yard run on the second play of Fernley’s second possession, making it 13-0.

South Tahoe answered with its best drive of the game, marching 80 yards in nine plays to score on a 1-yard run by James Adams.

Kyle Jones responded two plays later with a 60-yard touchdown run, and Lonnie Halterman added a 17-yard score with 7:19 left in the second quarter for a 27-7 lead.

After a 97-yard touchdown run by Anthony Thompson was called back by a penalty, Steele connected with Halterman on a 94-yard touchdown pass that made it 34-7.

Afterward, Ward said his message to the team leading up to the game was about the Reno High team that barely made the playoffs with a .500 record, but went on to win the Northern 4A.

The point, he told them, was to keep working, keep improving, and no matter how they stand now, they can still become the best team in the league when it matters.

It’s a message Ward said the team’s leaders seem to have taken to heart.

“Our leadership, our captains did a lot better at controlling some things,” Ward said. “After our second loss, they didn’t let them hang their heads or anything.”