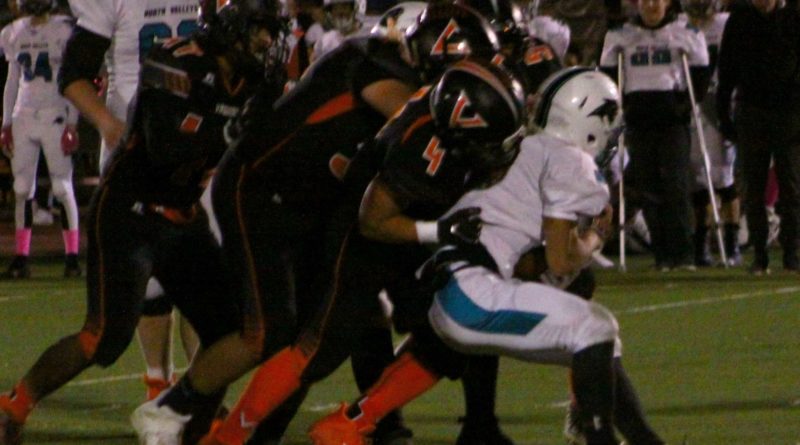 Playoff seed to be determined by outcome of Fallon, Truckee games

While most of the rest of Nevada’s high school football teams will take the field Thursday night because of Friday’s Nevada Day holiday, the Fernley Vaqueros will be anxiously watching the outcome of two other games that will determine their playoff seed.

They they’ll go out and finish their own regular season Friday.

The Vaqueros will host El Cajon (Calif.) Christian at 7 p.m. Friday in their regular season finale, after finishing up their league schedule with a 44-7 win over North Valleys last Friday.

The Vaqueros completed league play with a 6-2 record, and will most likely be the No. 2 seed, unless two major upsets occur, which leaves the Vaqueros in the unusual position of rooting for Fallon.

Closing the season with a nonleague game before going into the playoffs isn’t ideal scheduling, but the Vaqueros were forced to scramble to fill the open date created when Dayton decided to pull out of the Northern 3A and play this season as an Independent. Dayton ended up canceling its season after the first couple weeks.

“We kind of suspected we might be pretty good, and we didn’t want to take the chance of having two consecutive weeks off,” coach Chris Ward said.

As the No. 2 seed, the Vaqueros would have a bye the first round of the playoffs next week.

With that being the case, Ward said the Vaqueros will prepare for Friday’s game as any other, with no intention of resting players for the playoffs.

“We’re going to go out to win the game,” he said. “If it comes crunch time and the win’s on the line, we’ll go for the win.”

It’s rare that a team is confident enough going into a game that a part of its plan is to invoke the mercy rule, but that’s exactly the situation the Vaqueros were in last week, and things went right according to the script.

“We were hoping to get to that running clock and get out of there with no injuries or anything like that,” Ward said. “The biggest thing was just to make sure that we didn’t get anyone banged up.”

The Vaqueros’ defense made sure that was the case, holding North Valleys to just three first downs in the first half, while Fernley was building a 30-0 lead.

Six of North Valley’s nine possessions ended in a punt, with a missed field goal, the end of the first half and a touchdown on their last drive accounting for the other three. It was the fourth time in nine games this season the Vaqueros have held an opponent to once score or less.

On offense, the Vaqueros were dominant on he ground as they have been almost very week, albeit in a different way this time.

Quarterback Miles Steele, the Vaqueros’ leading rusher who came into the game needing just 55 yards to reach 1,000 for the season, was limited to just seven carries for 19 yards by a North Valleys defensive scheme that lined up an outside linebacker right where Steele might normally run on an option keeper.

North Valleys played a three-man defensive front with their defensive ends lined up inside the offensive tackle, and outside linebackers lined up wide.

While that limited opportunities for Steele on keepers, it opened up both the dive and the pitch.

Fullback Brandon Reyes was the main recipient on the inside, getting 13 carries for 124 yards and a touchdown. Anthony Thompson used the open outside lanes to romp for 124 yards on just five carries and two scores, including a 20-yarder where he tiptoed the sideline to stay inbounds.

With a 23-0 lead, the Vaqueros smartly used their timeouts on defense to get the ball back for one last scoring chance before halftime.

After two penalties cost them 18 yards, Thompson took an option pitch to the right, but had nowhere to go when the got to the sideline, so he went back across the field and down the left sideline for 66 yards. That set up a 10-yard touchdown pass from Steele to Lonnie Halterman with 27.9 seconds left in the first half that made it 30-0 and put the Vaqueros in position to force a running clock with one more score.

A 14-yard run by Thompson accomplished that with 8:16 left in the third quarter.

With the Vaqueros’ backups on the field, a 12-yard touchdown run by Jesse Sapien made it 44-0, before North Valleys scored with 8:03 left in the game.

Spring Creek: Clinches No. 5 seed with a win over Elko. Falls to No. 6 seed with a loss to Elko.