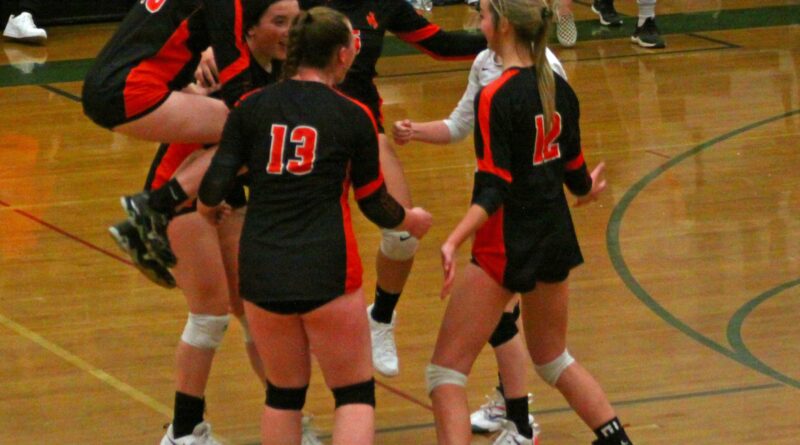 After coming back from two sets down to beat Moapa Valley in the 3A state semifinals Friday night, the Fernley High School volleyball team found itself in the same situation Saturday against Truckee in the state championship match.

This time, it proved to be too much to overcome.

“The Lady Vaqueros fell a little short on Saturday, but the girls played great and we left that gym with pride,” coach Stephanie Felton said. “This weekend was special and an honor for the girls because the last time a FHS volleyball team made it to state was in 1985.”

Felton actually played on that 1985 team with two of her cousins. She couldn’t remember who they played, other than that the tournament was in Las Vegas.

The Vaqueros were accompanied Friday and Saturday with a raucous crowd that celebrated every point wildly, and which rushed the court after the Vaqueros completed their comeback against Moapa Valley to reach the state title match. They even received an escort out of town on their way to Reno for the match, led by fire trucks from the North Lyon County Fire District.

“The girls also greatly appreciate the Fernley community and our school family for all of the support they have showed them,” Felton said.

The Vaqueros had their hands full from the start against Moapa Valley, which won the Southern 3A Region tournament the previous weekend.

The Vaqueros actually started well in both of the first two sets and led the first set 22-19 before Moapa Valley finished strong to win it 25-23. Fernley held several leads in the second set, but after it was tied 7-7, Moapa Valley steadily pulled away to win 25-15.

Before the third set, Moapa Valley coach Mandie Matheson implored her team to finish off the Vaqueros while they were down, and not let them regain any momentum.

Felton, meanwhile, implored her team to keep fighting and told them they could come back.

“We talked about that we knew we could do it, we just had to trust each other, and leave everything out on the court,” Felton said.

With consistently strong serving, the Vaqueros built a 7-4 lead on a kill by Willow Jacobson, but Moapa Valley scored the next eight points to lead 12-7. Fernley answered right back with six straight of their own and eventually built an 18-14 lead. After Moapa Valley got within 18-16, another kill by Jacobson stabilized the Vaqueros and they scored seven of the last eight points to win the third set 25-17.

In the fourth set, The Vaqueros jumped out to an 8-2 lead, but a big Moapa Valley run had the Pirates on top 20-16 and looking poised to finish off the match. But the Vaqueros won a long rally for a point to stop the run, then scored five straight, including an ace by Arianna Mathern and two kills by Jacobson to tie the score at 20. It was tied at 21 when a Moapa Valley bump hit the ceiling and bounced down on their own side, then Haley Jensen had a kill, Jacobson served an ace and Fernley won the set when a Moapa Valley tip rolled across the net and didn’t go over.

That set up the fifth set. The Vaqueros trailed 2-, but scored four straight and never trailed again, winning 15-12.

“We played tough, we didn’t give up,” Felton said. “We got down a couple times, we just kept trusting each other and we prevailed.”

Jacobson had 18 kills and Heaven Conner added eight, Aly Sullivan had 16 digs, Karley Hodgden had 11 assists and Leahi Hale had 10.

Hoping for a repeat of their comeback Friday night, the Vaqueros played more aggressively and confidently in the third set. Neither team led by more than two points until consecutive kills by Heaven Conner put Fernley up 12-9, followed by an ace by Lashay Stevens to make it 13-9. Three times Truckee pulled within a point, the last at 19-18, but Fernley finished the set with six consecutive points, punctuating the win with an ace by Jacobson on set point.

The fourth set was just as close. After Truckee started it out with a 3-0 lead, the Vaqueros battled back and tied the score 7-7 when Jacobson blocked a Truckee spike high in the air, then she jumped again and spiked the rebound. Truckee again went ahead with three straight points, but Fernley came back to take a 12-11 lead on a push by Jensen. Truckee answered with six consecutive points, and the teams trades scores to the finish, with Truckee on top 25-19.

Jacobson had 13 kills and four blocks, Conner had six kills, Hodgden had nine assists and Hale had eight, while Sullivan had 20 digs.