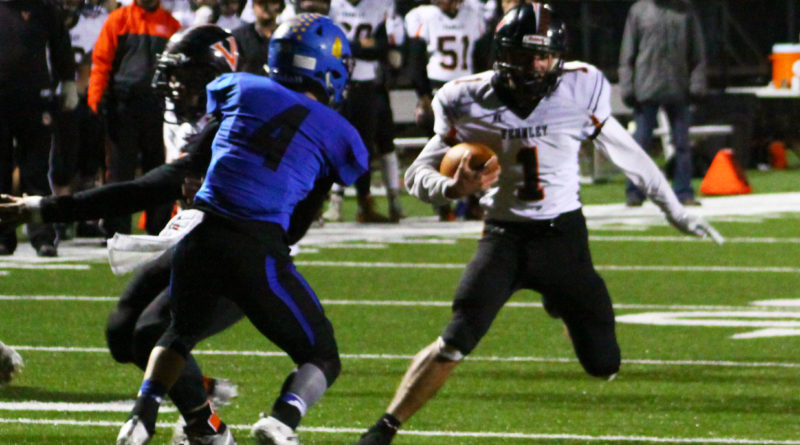 During much of last Tuesday’s practice, the Fernley football team worked on a handful of special plays in which wide receiver Ren Arroyo lined up in the backfield and threw the ball.

But that plan, and most of the others the Vaqueros put in for Friday’s Northern 3A playoff game at South Tahoe, went out the window on the second play of the game.

After hanging tough for a half, including a pair of missed golden opportunities, the Vaqueros’ season collapsed under a passing barrage by South Tahoe quarterback Tommy Cefalu.

Cefalu threw four touchdown passes, three in the third quarter, and also ran for a score as the Vikings eliminated Fernley from the playoffs with a 35-7 win.

The Vaqueros’ game plan went out the window when quarterback Zach Burns injured his knee on the second play of the game, while playing defense. That forced Arroyo to step in at quarterback, and eliminated the special packages the Vaqueros had installed this week to use Arroyo to throw the ball from a running back position.

“This week we had Ren playing our fullback spot so we could set up some play action stuff with him to throw the ball with, but we never got a chance to use it because of our injuries,” coach Chris Ward said.

The Vaqueros were already without backup quarterback Cameron Bertok, who suffered a helmet to helmet hit in last week’s game against Dayton.

“That kind of explains why we don’t really play our quarterback on defense a lot, but there was nothing else,” Ward said. “We needed him out there against their receivers so we got him fired up this week, and unfortunately, that’s what happened.”

Arroyo had battled Burns for the starting quarterback position during preseason practices, but Burns won the job in large part, ironically, because Ward doesn’t like to play his quarterback on defense, and Arroyo is an all-league caliber free safety.

“Ren, I take my hat off to him,” Ward said. “He made huge sacrifices this year. He’s a kid that was competing for that quarterback job at the beginning of the year and this is one reason why, he’s a really good defensive player for us, and if he was going to be playing quarterback for us, he probably wouldn’t be playing much defense, and that was going to hurt us there too. My hat’s off to him and I really appreciate what he did making that sacrifice for what we think was the betterment of the team.”

Arroyo’s running ability kept the Vaqueros in the game early, with a couple of big runs and a 43-yard pass to Russ Ortiz leading to Fernley’s only touchdown, a 3-yard touchdown run by Arroyo that tied the game 7-7 with 7:51 left in the first quarter.

The game couldn’t have started worse for the Vaqueros. Fernley fumbled the opening kickoff of the game, when the Vikings booted a high, short kick. Burns was then injured on the second play of the drive, and the Vikings cashed in on the turnover with a 13-yard touchdown pass from Cefalu to McCallan Castles for a 7-0 lead.

“That’s just one of the typical things that happened to us this season,” Ward said.

The game turned on the next two Fernley possessions.

Playing in a persistent misty drizzle throughout the game that got heavy at times, the Vaqueros twice drove inside the South Tahoe 5-yard line, but came up empty both times. The first time, the Vaqueros went for it on 4th and goal from the 3, but A.C. Reyes was stopped at the 1 after catching a pass from Arroyo.

The Vikings then drove 99 yards for a 1-yard touchdown on a quarterback sneak by Cefalu that made it 14-7.

Fernley drove right back down to the goal line and again came up empty, despite getting a pair of breaks. Twice the Vikings jumped offside when the Vaqueros lined up to kick a field goal, make it 4th and 1. Arroyo ran for the first down, but South Tahoe stopped four runs from inside the 5. On the two drives combined, the Vaqueros ran eight plays inside the 10-yard line and couldn’t score.

“That changes the complexity of the game,” Ward said. “The emotions and all that kind of stuff changes when that doesn’t happen. It just puts you in different play calling situations, and it’s huge.”

Instead of a potential halftime lead, the Vaqueros found themselves trailing 21-7 when South Tahoe scored on a 37-yard pass from Cefalu to Noah Jackson, and Cefalu added two more touchdown passes in the third quarter.

Afterward, defensive coordinator Scott Gillespie told the team the game was a microcosm of their entire season, when injuries, turnovers and bad luck resulted in losses in several games the Vaqeuros had the chance to win.

“Coach Gillespie was right, it was just like a mini season there, things we had going wrong, injuries and stuff like that,” Ward said.

Afterward, players mingled on the field long after the game, hugging one another, family members and coaches, lamenting the end of a season that didn’t turn out the way they’d hoped.

“I tell you, as far as people go, this is a great group,” Ward said. “They are great kids. I mean they are good people. That’s what I think I feel so bad about more than anything, is we lost a couple games that we probably shouldn’t have and I wish for them things could have gone better. That’s a good group of kids, I really enjoy these guys.”