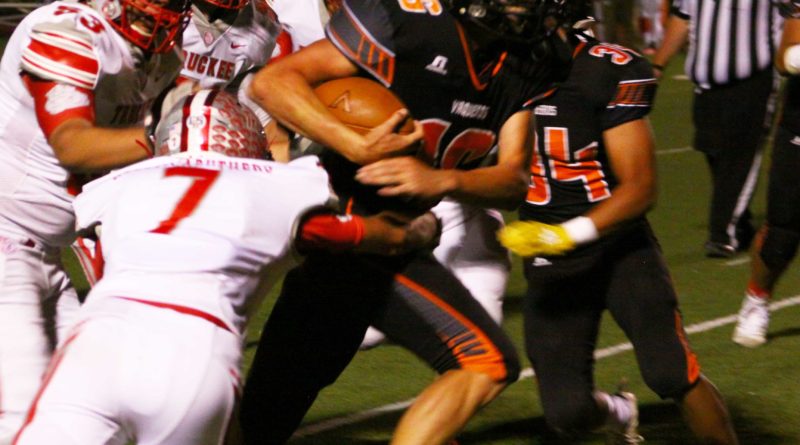 Maybe it’s the old offensive lineman in him, but if Fernley coach Chris Ward had his way, his team might not ever throw a pass.

While they may not have been trying to, the Vaqueros showed why Friday night.

Fernley rolled to a 41-14 win over Truckee in the Northern 3A League opener for both teams. While the Vaqueros did attempt five passes in the game, they didn’t’ complete any, and didn’t need to, amassing all 374 of their total yards of offense on the ground, with 14 of their 49 rushing attempts going for 10 yards or more.

“When it gets rolling, it’s pretty,” Ward said. “Better than throwing that ball all over the place.”

The Vaqueros established themselves early, driving 90 yards in 14 plays on the opening drive of the game. Ripping off yardage in chunks, the drive included a 10-yard run by quarterback Miles Steele, and 11, 14 and 19-yard runs by Brandon Reyes, leading up to a 4-yard touchdown by Steele.

“If you can get to the third part of the option and get it cleaned up, they’re usually out of bodies,” Ward said.

The onslaught was just beginning. After a Truckee punt, Steele capped a five-play, 46-yard drive with a 13-yard scamper for a 21-0 lead, and added a 1-yard quarterback sneak to make it 28-0 with 1:14 before halftime.

After having shut out Bishop 24-0 in the opening game last week, the Vaqueros were mere seconds from completing six consecutive shutout quarters when Truckee finally dented the scoreboard. On fourth-and-3, Jackson Kahl found Isaac Cruz with a 9-yard touchdown pass to make it 28-7 at the half.

But any thoughts Truckee had of a second half comeback were thwarted when sophomore free safety J.R. Reyes perfectly read a Truckee receiver’s route and intercepted Kahl’s pass, then took it 46 yards for a 35-7 lead.

Reyes got involved on offense as well, scoring from 7 yards out with 3:39 left in the third quarter to make it 41-7.

While beating last year’s 3A state runner-up would likely get attention of the rest of the Northern 3A, the margin of victory will likely make the rest of the league take notice.

And for Ward, watching the film of the Vaqueros dominating on the ground is likely to raise the corners of his mouth into a smile.

“It was pretty,” he said. “There’s no other way to describe it. It’s pretty.”