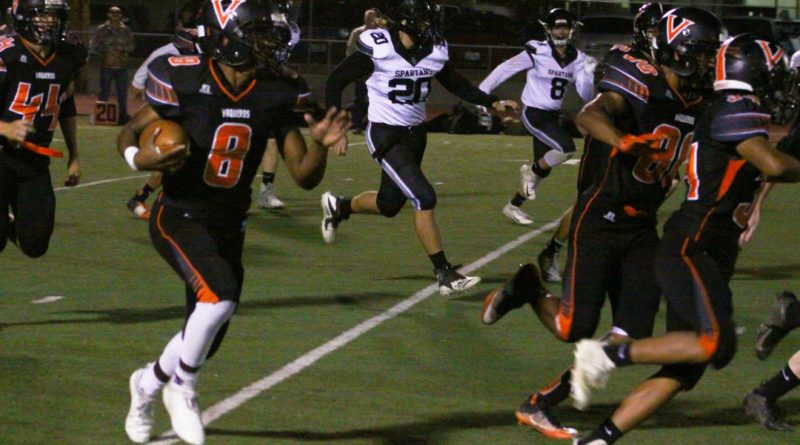 Six weeks ago, the Fernley High School football team stood 1-4 overall, 1-3 in the Northern 3A, and the playoffs, much less advancing, seemed like a far off possibility.

Six straight wins later, the Vaqueros are headed to the Northern 3A semifinals.

The Vaqueros combined their most efficient offensive game of the season, a couple of big plays and the stout defense they’ve played most of the season.

“It just amazing,” senior linebacker Noah Osterman said. “We’re not as talented as we were last year, but we sure do have a lot of heart.”

As they have through most of their closing winning streak, the Vaqueros started the game quickly on offense.

A kickoff return by Anthony Thompson to the Spring Creek 30 put the offense in good position, but instead of scoring for an early lead, the Vaqueros had to deal with some adversity, when Ryan Thurston intercepted a pass in the end zone. Thurston and Junior Halterman initially caught the ball simultaneously, but Thurston was able to wrestle the ball away.

The Spartans wasted no time taking advantage, driving 80 yards in four plays. A 35-yard run by Reed Westwood led to the 33-yard touchdown run by Hunter Buzzetti that put the Vaqueros in a 7-0 hole.

After the Vaqueros recovered a squib kick that hit a Fernley blocker, the Vaqueros marched 52 yards in 12 plays, converting two third downs and a fourth-and-7 play along the way and tying the game on an 18-yard run by quarterback Miles Steele.

Fernley then got a break when Spring Creek mishandled a pooch kick and Fernley recovered at the Spartan 34. Roland Austin gained 13 yards on a short dump off pass from Steele, Kyle Jones ran for nine yards, A.J. Kuha ran for 10 and Steele scored from a yard out on the second try at a quarterback sneak. Because of a penalty against the Spartans on the touchdown the Vaqueros went for two, but were unsuccessful, and they had to settle for a 13-7 lead with 7.8 seconds left in the first quarter.

The Spartans tied the game at 13 on a 46-yard touchdown pass from Jeff Guthrie to Thurston. All of the Fernley defenders reacted to play action and stepped up toward the line of scrimmage, while Thurston ran past them all alone from his tight end position. He hauled in the pass at the 38-yard line and there was nobody back to chase him.

On Fernley’s next possession, a 50-yard run by Anthony Thompson set up a 3-yard score by Brandon Reyes to make it 20-13 with 5:06 left in the second quarter.

Both teams had a shot to score in the two-minute drill but Fernley was unable to get a first down and punted. Spring Creek’s effort ended when Guthrie was sacked by Thomas Chapin on the last play of the half, but Chapin suffered a serious leg injury on the play and was taken from the field on a stretcher.

The Vaqueros extended their lead on their second offensive play of the second half.

Steele took an option keeper to the left, cut into a huge hole and ran right past the safety, who was reacting to the dive fake, and went 86 yards for a touchdown and a 27-13 lead.

“The biggest thing is our offensive line just showed up there in the second half and took the game over by themselves,” Ward said. “It’s pretty easy to run that stuff when you’re blocking like that up front.”

The defense, meanwhile, was its usual stingy self, outside of the opening drive and the busted coverage on the touchdown pass.

“That first series wasn’t their best, and the other one, but they still played pretty good in the first half,” Ward said. “But they really stepped it up in the second half. That’s really good.”

The Vaqueros have won seven of their last eight games since starting the season 0-3, and six in a row since getting blown out at Elko in the fifth game of the season.

“Especially that Elko game I think was a huge, huge, wakeup call for them,” Ward said. “They were probably a little embarrassed and they just decided that it’s time to play.”

Senior lineman Ricky Dumont said it was senior leadership combined with the maturation of the junior class that kept the Vaqueros afloat and made the turnaround possible.

“We knew that it was going to be tough in the beginning, but I’m just proud of all the juniors that were able to build up from it and play with us,” Dumont said.