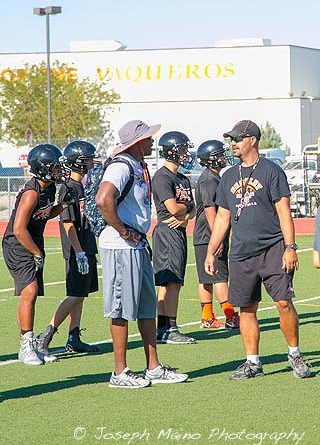 The one thing that’s been consistent throughout the years for Fernley football is quarterbacks.

Into that tradition step Ren Arroyo and Zach Burns.

While it wouldn’t be fair to pin the hopes for the Vaqueros’ success solely on the shoulders of whichever of those two wins the starting quarterback position, their performance will go a long way toward determining how far the Vaqueros go this season.

“We’ve been pretty successful, and we’ve had a string of good quarterbacks for quite a few years, and last year was no exception, Kyle was pretty good,” coach Chris Ward said. “I’m hoping Zach and Ren can continue on. It’s nice to just be able to replace. That’s what we hope.”

Arroyo and Burns are competing to replace Kyle Throckmorton at quarterback for the Vaqueros, but no matter which wins the job, they will do it in a much different fashion than Throckmorton.

Throckmorton completed 31 of 75 passes for 352 yards last season, with 4 touchdowns and 4 interceptions. It’s likely either Arroyo or Burns will blow past those numbers of attempts and yards by midseason.

However, Throckmorton was fifth in the state in Division I-A in rushing with 1,005 yards, averaging 8.5 yards per carry with 12 touchdowns, and his ability to run the option was the focus of opposing defenses every week.

Arroyo and Burns are both good athletes who can run the option, but neither has the explosive speed Throckmorton brought to the position.

Arroyo completed 9 of 22 passes for 172 yards and 2 touchdowns last season as Throckmorton’s backup, and started Fernley’s 49-6 loss to Fallon in the first round of the Division I-A playoffs last season. Burns quarterbacked the Vaqueros’ JV team that went 8-0 and averaged 45.5 points per game.

The Vaqueros started practice with 105 players in the program, and they will be split pretty evenly among the varsity, JV and freshman teams. Of those, 93 earned their Regulator stripes with at least 90 percent attendance in the team’s summer conditioning workouts.

Ward said a scrimmage Aug. 19 against Hug and Douglas was pretty even. Fernley dominated Douglas in a scrimmage last year, and beat Hug 34-12 in the season opener, but Ward said both of those teams are much improved this season.

He said the Vaqueros competed well in the scrimmage, despite a very vanilla game plan.

“We didn’t show a whole lot, we were just looking at which kids were going to play with a motor, as we call it,” he said. “There wasn’t a ton of scoring, we seemed to take care of the ball pretty well. It was real good to have quality opponents to scrimmage with.”

Ward said both quarterbacks played well in the scrimmage, against Douglas and Hug, and he said the coaching staff will grade the film before deciding who will start Friday’s season opener against Fallon.

“They’re competing and they both did good things,” Ward said.

The running game looks to be in capable hands, with seniors Sam Ramirez and A.C. Reyes returning, and a couple of additions from the JV team in the mix. Ramirez ran for 446 yards at 5.9 per carry with 7touchdowns last year as the team’s third leading rusher, and has breakaway speed.

Last year’s leading receiver, Shane Jeakins, caught just 10 passes for 124 yards, but Ward expects a lot out of this year’s receiving corps with a bigger emphasis on the passing game. Jeakins returns and Ward is high on junior Russell Ortiz, who had a big year for the JV team last season and was brought up to the varsity for four games, catching 1 pass for 25 yards.

“Russell Ortiz is a good receiver,” Ward said. “He runs good routes, he’ll go up and get the ball, and he’s a tough kid.”

Whichever quarterback doesn’t win the starting job will also be on the field somewhere.

Ward is excited about the Vaqueros’ potential on the line, despite the loss of Tyler Roemer, who earned a scholarship to San Diego St.

Center Joey Shepherd, who was an all-state selection last season, returns to lead the offensive line, Shepherd is 6-1, 220 pounds, and the Vaqueros also have good size on the line with Harry McDonald at 6-2, 270 and 12 linemen who are over 200 pounds. With 14 linemen on the team, Ward said they Vaqueros will be able to rotate throughout the game and keep players fresh, without dropping off much.

“Tyler is a big hit to us up front, but I’m excited about some of the other positions,” Ward said. “We’re going to be bigger at tackle than we were last year. Even though we lost Roemer, could be a better unit overall because of the depth in those other positions.”

Defensively, Reyes is the team’s leading returning tackler at linebacker. He tied for third on the team with 43 tackles last season, led the team with 8 tackles for loss and tied for the team lead with 3 interceptions.

Each of the offensive linemen, except the centers, will play key roles on defense as well, and Ward said the same depth on the line and athleticism at the skill positions on offense will translate to defense as well.

“About the only two people I don’t like to play on defense is our quarterback and our center,” Ward said. “I think we have more depth this year. I think we’re going to have more competition for our positions.”

After going 8-3 overall and 7-2 in the Division I-A, which is now been renamed the 3A, as it was before the last NIAA realignment, the Vaqueros are looking to break a string of five consecutive first-round playoff losses. The Vaqueros have finished in fourth place each of the last five seasons, and Ward said the team has the potential to be among the top teams in the league again this season.

“I still think potentially we could be pretty good, real good,” he said. “But there are always questions every year, are we going to be tough enough to stand there and duke it out with somebody?”

The Vaqueros will get a quick answer to at least that question. They open the season Friday against Fallon, the defending state champion.

Although Ward prefers to start with the basics and slowly build through fall practice, facing the defending state champs in the first game put a little more sense of urgency in their preparation.

“These seniors, they’ve been running this stuff for four years, so they better have an idea what’s going on,” Ward said.