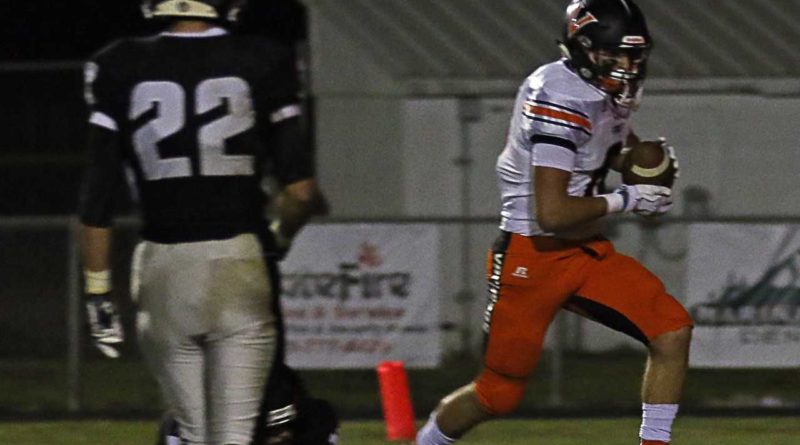 When the clock hit zeroes at the end of Fernley’s 32-22 win at Spring Creek last Friday night, the Vaqueros didn’t get much chance to celebrate their move into first place in the Northern 3A.

They made up for it in the locker room and on the bus ride home, but Monday, coach Chris Ward and his staff warned the Vaqueros to set that win aside and move on.

The Vaqueros rallied from an 11-point first half deficit, shutting out the Spartans in the second half to come away with the 32-22 win.

Afterward, Ward said, the stadium lights were turned off before the players had even gathered all their gear from the sideline.

But it was a joyous locker room and bus ride home, the Vaqueros relishing the latest in what has become a season full of big wins.

“On a game like that, they need to have fun or else it becomes physically draining, mentally draining,” Ward said.

Spring Creek caught the Vaqueros off guard in the first half last week with a train formation, with six players lined up single file in the backfield, before shifting into a legal formation before the snap. They also burned the Vaqueros with several big plays, but Ward said coaches Scott Gillepsie and Jake McCullar made some defensive adjustments at halftime that paid off.

Friday the Vaqueros will host Wooster, and Ward was quick to remind the Vaqueros of how they weren’t focused when they faced the Colts last year, and needed a last-minute drive to come from behind to beat the Colts 15-14.

“We weren’t focused last year and you could tell it in the locker room,” Ward said. “We weren’t ready to play.”

Ward said the team discussed that situation before taking the practice field this week.

“That’s one of the first things we addressed, that your main challenge this week is to get your mind set for another week,” Ward said.

After facing spread offenses the past couple of weeks, the Vaqueros have had to change gears this week to prepare for Wooster’s power-based running attack.

“They’re lining it up and taking it right at you,” Ward said. “Not saying that Wooster doesn’t throw the ball, they do. But they’re big believers in that ground game.”

Ward said Wooster will attack with a handful of formations featuring twin receivers and offset backs, with power runs to the weak side and counter plays to the strong side. He said they will occasionally spread out and throw the ball as well.

Defensively, Ward said the Colts play a base 4-3 defense, but use a lot of shifting and motion on defense and use a lot of different types of blitzes

The Vaqueros come into the game at 6-0 in league, but hold only a one-game lead over Fallon, Spring Creek and Truckee, who are all 5-1.

“I’ll probably be more comfortable after about three more games,” Ward said. “We drop one game, we could go from first to third in the league real quick. We’re just trying to get to 1-0 every week.”