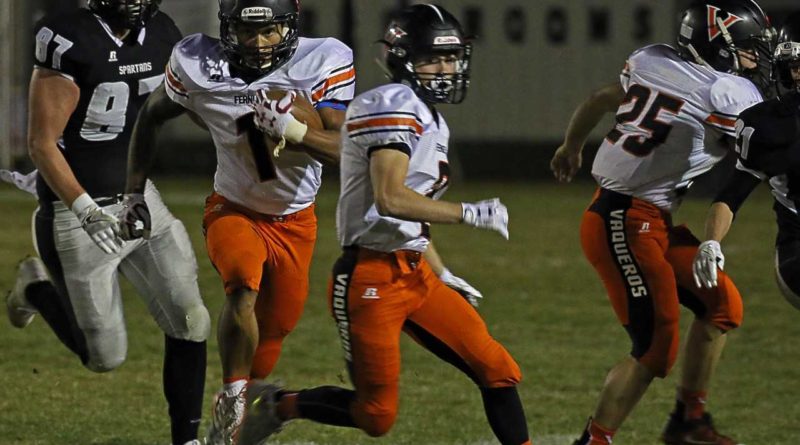 SPRING CREEK – Following a back-and-forth first half during Spring Creek’s homecoming on Friday, the Fernley Vaqueros took control with physical football in the third and fourth quarters and gave the Spartans their first loss of the season in league play by a final score of 32-22.

The billing of the Fernley-Spring Creek football as the game of the week did not disappoint in the early going.

The Spartans kicked off the hellacious scoring output two minutes into the first quarter.

Senior running back Jason Painter started a run toward the left tackle and made a great cut back to the right, leaving Fernley defenders grabbing for grass and looking up at the back of “22s” jersey as he raced 53 yards to the house.

Spring Creek’s two-point conversion was unsuccessful but the Spartans jumped to a quick 6-0 advantage.

The Vaqueros started their first possession in good position after a return to the 40-yard line by senior Zac Terra.

Fernley moved the sticks with the power running of senior Willy Pritchard up the middle, setting up at the Spring Creek 26 after an 18-yard strike from senior quarterback Zach Burns down the right sideline to senior Aaron Proctor between the corner and the safety.

The Spartans’ defense stiffened and forced a 4th-and-4 from their own 13-yard line.

Fernley elected to kick and pulled to within 3 on a 30-yard field goal by junior Cooper Henderson with 6:59 remaining in the first quarter.

Painter broke a long run to the Fernley 27, and it took the Spartans one play to cash in from there.

Painter met Proctor at the goal line and punched home for the conversion, giving the Spartans a 14-3 lead with 6:15 remaining in the first.

Proctor’s speed hurt the Spartans on Fernley’s next drive.

He found the outside on a toss while in motion coming to the left for a first down,

The Vaqueros picked up a big 3rd-and-2 at the Spring Creek 32, and Proctor took a give off-tackle left and darted to paydirt with ease.

Fernley moved the pocket to the right and Burns connected with Pritchard for the two-point conversion.

Spring Creek went heavy wildcat on its next drive, Larson picking up three straight first downs with his legs.

The Spartans stalled out and faced 4th-and-4 from the Fernley 27, going wildcat once again, but the pass fell incomplete.

Fernley took over on downs.

After the change of direction in the second quarter, Burns moved the Vaqueros downfield with his legs.

Extending a pass play, Burns bought time and broke Spring Creek’s outside contain and dashed to the Spring Creek 30 for a 20-plus-yard run.

He capped the drive with a fade-route throw to senior Cameron Bertok.

Henderson added the extra point and gave the Vaqueros an 18-14 lead with 9:43 remaining in the half.

The Spartans sucked up the Fernley defense with runs by Painter, allowing Larson to get loose.

He raced behind the defense and reeled in a picture-perfect, 66-yard touchdown from Ledford.

Both teams handed the other the football on their next drive, each turning the ball over on downs.

Facing 2nd-and-long, Burns found junior AJ Kuha out of the backfield on a corner route near the right sideline and set up 3rd-and-short.

Burns picked up the first down and then threw a dart to Proctor on a crossing a route across the middle, and he picked up a huge block by Bertok – freeing Proctor for a huge run after the catch for a 51-yard gain to the Spring Creek 7.

After a penalty, Spring Creek’s right cornerback lost inside leverage and Burns found Bertok for the second time in the end zone for an 11-yard TD.

The PAT by Henderson was good and gave Fernley a 25-22 lead at halftime.

Scoring in the third quarter was non-existent after a crazy 24 minutes in the first half.

The Vaqueros were forced to punt after a tackle for a loss by junior Chance Bailey, who then sacked Burns for as huge loss.

Unfortunately for Spring Creek, the Spartans were unable to move the sticks more than twice.

Larson picked up a Fernley pass interference penalty on a deep throw, and Painter ran for a first down but the drive came to a halt when Larson was tackled in the backfield on second down and Ledford was sacked on third.

The Spartans punted to Proctor – who is dangerous – immediately showing how much.

He took the kick at the Fernley 40 and zipped inside the Spring Creek 10, but the return was nullified with a block in the back.

Despite being moved back, the Vaqueros showed resolve.

Fernley went to its three-headed monster: Burns, Pritchard and Proctor.

The ball was moved meticulously down the field, one chain-mover at a time, including a 4th-and-1 run by Burns.

With 10:48 remaining, Burns found Proctor on a post route from 16-yards out for his third passing TD of the game.

Henderson’s extra point was good, giving the Vaqueros a 32-22 lead and placing the Spartans in a must-score situation.

Inside their own 10, Fernley tightened up the gaps and forced a 4th-and-7 from the 9-yard line.

Senior Jake Oliphant was wide open along the left side but a pass toward the middle of the field was picked off by Proctor.

He returned the ball to the 35, but Fernley was moved back with a holding penalty.

The Vaqueros went back to the well, feasting on power football.

Fernley continued its advantage at the point of attack and made tremendous surges at the line of scrimmage, but were marched way back on an unsportsmanlike conduct.

Spring Creek hurt itself with a facemask penalty after a stop, giving the Vaqueros a first down at the Spartans’ 48 with 2:56 on the clock.

The Vaqueros picked up consecutive first downs and ran out the clock, taking a 32-22 victory during Spring Creek’s homecoming.

Fernley took over sole possession of No. 1 in the Division 3A North standings with a 6-0 record, dropping Spring Creek to 5-1.

The Spartans will travel and look to bounce back at 1:30 p.m. Saturday in Truckee.