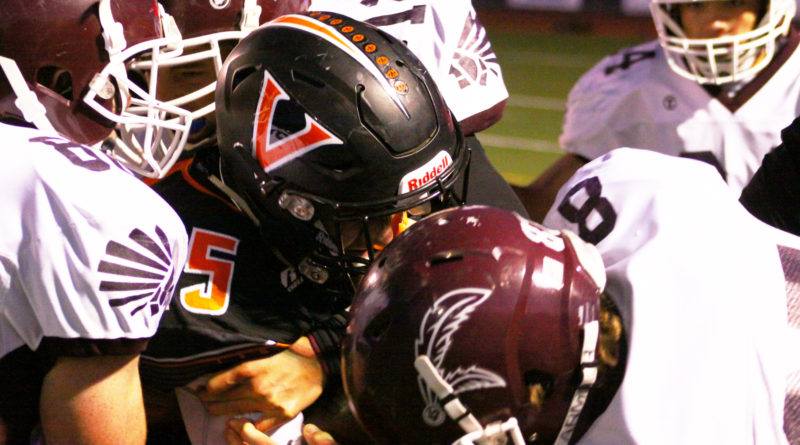 The No. 1 seed for the Northern 3A playoffs is on the line as Fernley hosts Truckee Friday night.

The Vaqueros enter Friday’s game in first place in the Northern 3A with a 7-0 league record, while Truckee is tied with Fallon for second place at 6-1.

Coach Chris Ward said Friday’s game is probably the biggest the Vaqueros have played in his eight seasons as head coach, because the Vaqueros are close to accomplishing all of the goals they set before the season.

“We’ve been able to do pretty much what we wanted to do with a couple of games left,” Ward said. “We’re close, and that’s makes it so nerve-wracking for me.”

“When I think of Truckee especially the last couple years, they do play team football really well,” Ward said.

The Wolverines average 273.5 yards rushing per game, spread mostly among eight players, each of whom have scored at least two touchdowns. Jamie Parisi is the leading rusher for Truckee with 389 yards on 34 carries. Five different Truckee receivers have caught a touchdown pass, led by Parisi, also the team’s leading receiver with 21 catches for 416 yards and 9 touchdowns.

Quarterback Marcus Bellon has completed 71 of 119 passes for 1,247 yards, with 21 touchdowns and 6 interceptions. He’s also run 47 times for 213 yards and four touchdowns.

“The quarterback is a pretty shifty little guy,” Ward said. “He does make plays that get broken up, he has the ability to be a playmaker when plays break down.”

Ward said Truckee runs its traditional Wing-T offense, with quite a few different wrinkles thrown in.

“They’ve got their Wing-T stuff but they’re going to try to spread us out a little bit, try to confuse us with formations and motions, use a lot of deception and their blocking to get angles on us up front,” he said.

Defensively, the Wolverines play both odd and even fronts, and Ward said the Vaqueros will have to recognize the defense and make the right calls against what they see.

Ward said he believes the Vaqueros match up with the Wolverines, but to win, the defense will have to keep Bellon from making big plays and the offense will have to win the line of scrimmage against Truckee’s defense.

“They got a great tradition, they got a great history as far as football goes,” Ward said. “They had a little dip there a couple years ago, but for the most part they’re back to playing Truckee football.”