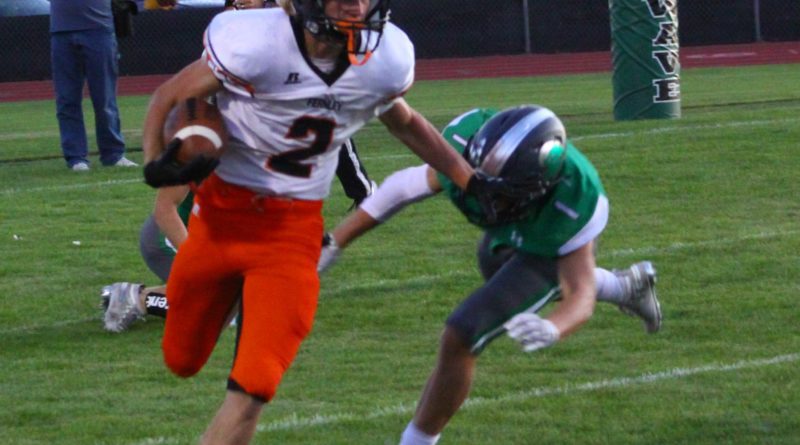 About the time Anthony Thompson reached the end zone on a 40-yard touchdown run last Friday night in Fallon, the thoughts of many on the Fernley sideline turned to a September night in 2017.

That’s the night Aaron Proctor, on a very similar play, ran 57 yards for a touchdown to give the Vaqueros not only a chance, but the belief, that they could come from behind to beat Fallon.

Alas, that’s where the similarities between the two nights ended.

Fallon quarterback Elijah Jackson, who had torched the Vaqueros all night with one big pass play after another, found Tommy McCormick 51 yards downfield on third-and-16, putting the kibosh to the hopes the Vaqueros had of repeating that 2017 come-from-behind victory.

Fallon followed up the big Jackson-to-Richardson pass play with three more plays to run out the clock and seal a 42-35 win that gave both teams reason to both hope for and dread a potential rematch sometime this postseason.

Three times the Vaqueros found themselves trailing by three scores, on the strength of five Fallon touchdown plays of at least 40 yards.

That last of those, a 70-yard pass from Jackson to Brock Richardson, with 26.4 seconds left in the third quarter put Fallon up 42-21.

But Fernley had enough of an answer to get within one defensive stop of having a chance to finish the comeback.

“I was going, oh, let’s see if we can do this again,” Fernley coach Chris Ward said. “Almost.”

Thompson took a pitch along the left sideline, came within an inch of stepping out of bounds, but stayed inside the boundary for a 40-yard score cut the lead to 42-28 with 9:42 left in the game.

Two plays later, the Vaqueros recovered Jackson’s fumble at the Fallon 20, and Brandon Reyes cashed it in with a 4-yard touchdown run to get Fernley within 42-35, with 6:41 still to play.

Fernley got the ball back after another Fallon fumble, taking over at the Greenwave 40 yard line, but this time Fallon wasn’t fooled by a pitch play to Thompson and stuffed him for a 2-yard loss, and the chance evaporated after an incomplete pass on third down forced the Vaqueros to punt.

A bad snap that Jackson had to scramble to recover left Fallon facing third-and-16 from their own 35, but Jackson, as he had all night, eluded a rusher and heaved the ball downfield, where McCormick had gotten free and hauled in the pass at the Fernley 14.

“I don’t know if there’s quarterback in Northern Nevada who can do what he can do,” Ward said.

Fallon opened up its big lead with several other big plays, scoring on four of their five first half possessions, and following up with a defensive score after the one they didn’t.

The Vaqueros had little trouble moving the ball themselves for most of the night, albeit without the explosiveness the Greenwave showed.

They drove 72 yards on their first possession, only to come up empty on a fourth down pass, and on their third drive, marched 79 yards to get within 12-7 on a 1-yard quarterback sneak by Miles Steele.

Fallon got a 29-yard field goal by Samuel Robertson and a 3-yard touchdown run by Richardson to go up 21-7.

Fernley had a chance to cut the lead before half, recovering a fumble by McCormick with 1:15 left in the half, but on the next play, McCormick took it right back, intercepting Steele and returning it 53-yards for what seemed at the time a back-breaking touchdown with 54.2 seconds left.

That put Fallon up 27-7, but instead of being deflated, the Vaqueros came out for the second half with vigor.

“I’m pretty proud of them because they didn’t give up,” Ward said. “They could have quit at halftime and they didn’t. They came back and clawed their way back into it.”

The defense stuff Fallon’s opening possession of the third quarter, and the offense went 50 yards in eight plays for another 1-yard quarterback sneak by Steele to get within 27-14.

Fallon struck back quickly, however. On third-and-7 from his own 38, Jackson spun away from a blitzing linebacker who came unblocked, and fired a 62-yard touchdown bomb to Richardson to put the Greenwave back up 35-14.

A 53-yard option keeper by Steele set up a 10-yard touchdown run by Reyes got Fernley within 35-21 with 1:56 left in the third quarter.

After it was over, a disappointed Ward credited Fallon for making plays when they needed them, but said he feels good about how good his team can be, if they don’t let the loss get them down.

“I think we’ve got a lot of potential,” Ward said. “Yeah, it sucks to lose, but you know what, they clawed their way back into this thing and almost had a shot at the end.”