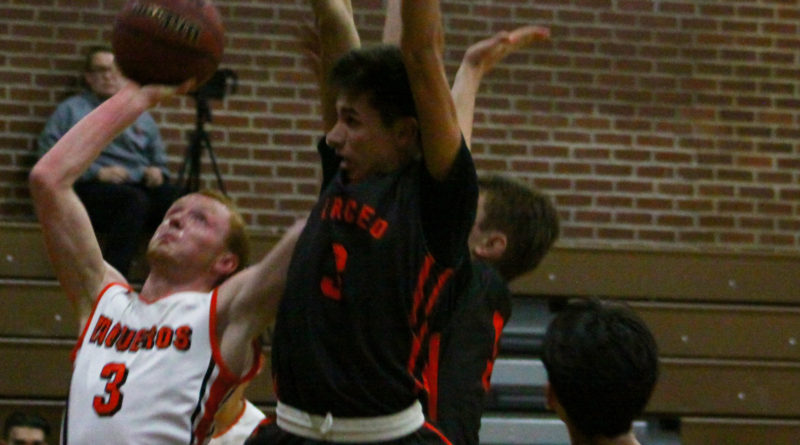 In Greek mythology, the king Sisyphus was sentenced to an eternity of pushing a boulder uphill, only to have it roll back and hit him every time he got near the top.

The Vaqueros got within a basket six times in the second half but never got over the hump, losing 60-53 to Merced in the fifth place game of the Rail City Classic Thursday night at Sparks.

The Vaqueros never led in the second half, unable to get over the hump after cutting the lead to two twice and to three on several other occasions.

A 3-pointer by Drake Howe with 2:21 left in the game pulled the Vaqueros within 56-53, the sixth time in the second half they drew within a single possession. But at that point they had committed only four team fouls, and Merced was able to run more than a minute off the clock while forcing the Vaqueros to foul. When they finally got into the bonus, Merced put the game away by hitting 4 of 5 free throws in the final 1:01, while Fernley couldn’t get a shot to fall.

The Vaqueros mostly handled Merced’s fullcourt pressure, and defended its dribble-drive motion offense well, but it was mostly unforced errors that hurt the Vaqueros. Several times in the first half the Vaqueros threw bad outlet passes after defensive rebounds, and in the second half they lost the ball several times while driving to the basket.

“I thought we played well, we just made a few too many mistakes down the stretch,” coach Derek Miller said.

Fernley led much of the first half, in part by creating easy scoring opportunities by beating the press, or by finding the open man against Merced’s scrambling halfcourt pressure.

Howe hit two 3-pointers in the first quarter, scoring 10 of Fernley’s 17 points in the opening period. But Merced scored the last eight points of the third quarter, six on 3-pointers by Anthony Robinson, who hit three of them in the quarter and four for the game.

Zach Burns led Fernley with 22 points, 15 in the second half as the Vaqueros tried to rally. Howe had 14 and Justin Turner had 11, including one sequence where he missed inside twice and got his own rebound before scoring on the third try to pull Fernley within 44-42.

The Vaqueros will go into the new year with an 8-5 overall record and 2-2 mark in the Northern 3A. They return to action Tuesday in a nonleague game at Incline, then host Spring Creek Friday night and Elko Saturday afternoon as league play resumes.

“It was better than practice, that’s all I can say,” he said.