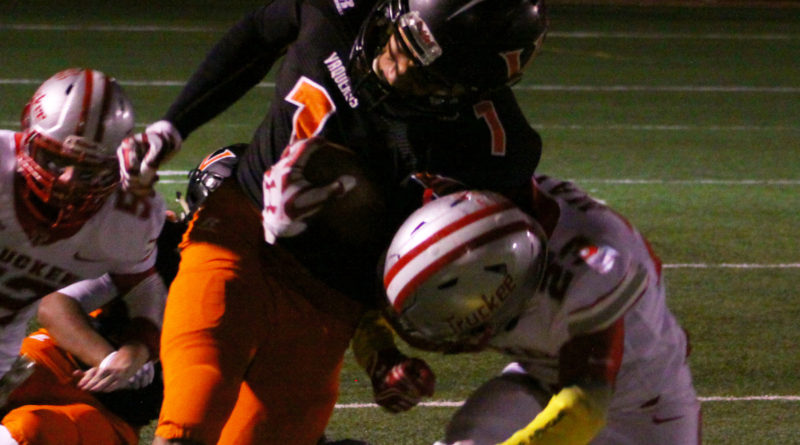 The script Fernley used to beat Truckee Oct. 20 worked so well for the Fernley Vaqueros, they went back to it Thursday night. But this time, the ending they wrote was a little less dramatic.

Fernley again got out to an early lead, and this time didn’t need late heroics to beat Truckee, 21-11, in a Northern 3A semifinal game, to advance to the 3A State semifinals next week.

Fernley will host Mojave, the No. 2 seed from the Southern 3A Sunset Region, which beat Virgin Valley Thursday night, 46-20.

As they had on Oct. 20, the Vaqueros got off to an early lead against the Wolverines. But while they had to survive some anxious moments, this time the lead stood up.

“I feel better now,” coach Chris Ward said. “It was a little close there when it was about four or five minutes down there.”

Fernley led by as much as 21-3, but a Truckee touchdown and two-point conversion with 6:14 left in the game got the Wolverines within two scores at 21-11.

But instead of rallying to take the lead as they had in that first meeting, Truckee’s last two possessions of the game netted just 11 yards over 13 plays, ending in an interception by Russ Ortiz that allowed the jubilant Vaqueros to take a knee and end the game.

While the Wolverines ran for 177 yards, on 38 attempts, 71 of those yards came on two scrambles by quarterback Marcus Bellon on broken passing plays.

“They weren’t having a whole lot of success running the ball on us,” Ward said.

Fernley ran for 276 yards on 43 attempts. Consecutive 11-yard runs by A.J. Kuha and Zach Burns got Fernley in scoring position on its second possession, and Burns finished the drive with a 28-yard touchdown pass to Cameron Bertok with 2:51 left in the first quarter.

Truckee cut the lead to 7-3 on a 26-yard field goal by Emmanuel Valenzuela-jones with 8:03 left in the second quarter.

But Fernley chewed 6:28 off the clock on a 12-play, 75-yard drive for a touchdown and a 14-3 lead on a 5-yard touchdown run by Burns with 1:35 left in the first half. That drive came after a kickoff return for a touchdown by Aaron Proctor was called back because of an illegal blindside block.

After a scoreless third quarter, Fernley took a 21-3 lead on another 5-yard touchdown run by Burns with 8:44 left in the game.

“This time we knew that we couldn’t let the foot off the pedal,” Bertok said. “All week we practiced on keeping the momentum going and I think we did a lot better doing that this time.”