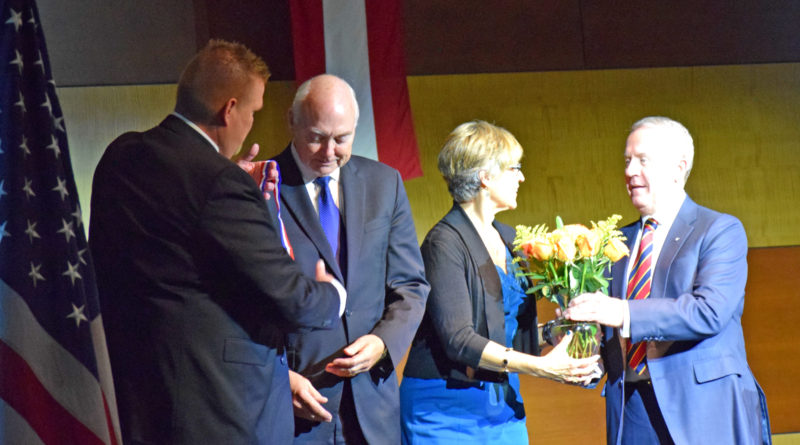 Family, friends and community professionals turned out to recognize Dr. Johnson’s long and distinguished career as an educator.

Keynote Speaker was Beryl Love, Executive Editor of USA Today, fellow Eagle and friend. His remarks focused on his skills learned as a Scout, his family of Scouts, and the implications of the Scout Law as it relates to his professional career with USA Today. He also led the audience in a campfire song.

The Distinguished Eagle Scout Award is awarded to Eagle Scouts who, after 25 years, have distinguished themselves in their life work and who have shared their talents with their communities on a voluntary basis. Only five percent of all Boy Scouts achieve Scouting’s top rank of Eagle Scout.

Johnson has distinguished himself through his career as an educator and now through his service as the president of the university. He has been a role model for many and has remained committed to the principles of the Scout Oath and Scout Law. He has met many community service needs through his volunteer service.

The National Eagle Scout Association Committee, under the direction of Alumni Relations at the Boy Scouts of America’s national office, selects the recipients of this award. Members of the selection committee are all recipients of the Distinguished Eagle Scout Award. The award was implemented in 1969, and since then more than 1,850 nominations have been approved. Only the local council of the Eagle Scout’s primary residence may nominate.

Following the Court of Honor, Council CEO, Paul Penttila, said, “Distinguished Eagle Scout Marc Johnson is a role model for us all and certainly represents the extraordinary character and leadership development that Scouting strives to instill in its adult and youth participants.”