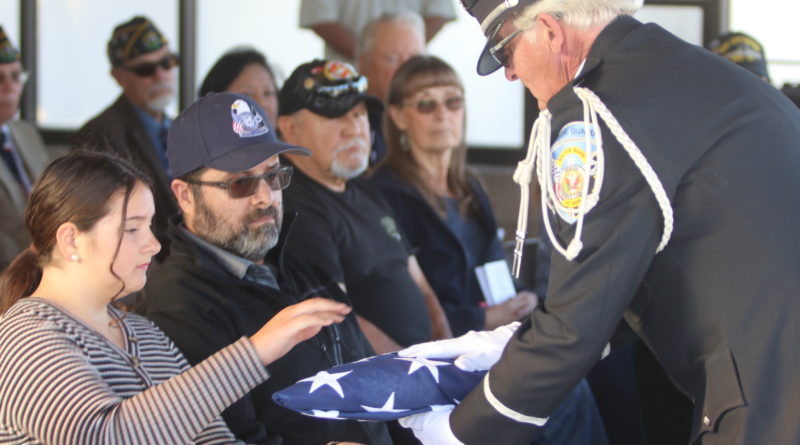 FERNLEY — She never knew her grandfather, but the tales of his exploits in France during the waning days of World War I led her to discover more about this Army sergeant who served in France 100 years ago.

Glenna Smith, public affairs officer of the VA Sierra Nevada Health Care System in Reno, used the occasion at the latest Missing in Nevada project to compare today’s duty to country to that of the first world war. Smith, who delivered the keynote remarks at the Northern Nevada Veterans Memorial Cemetery three days before Veterans Day, tied in two eras with similar, yet distinct missions.

This year’s Veterans Day marked the centennial when the 11th day, of the 11th month was originally designated Armistice Day but changed to Veterans Day in 1954.

“Thank you to the Nevada Veterans Coalition for always presenting the most beautiful military honors to our vets — our sailors, soldiers, marines, coasties — it means a lot,” Smith said.

Smith said the cemetery has a special place in her heart, and with the latest service for nine servicemen occurring before the holiday weekend, it gave her time to reflect on her grandfather’s service like that of another World War I soldier. Rolland Whitt, enlisted in the Army from June 1919 to July 1920 and only recently were his remains identified and released for burial. He was among those laid to rest after the military service that included a eulogy, a 3-volley salute, the playing of “Taps” and a flag-folding and presentation.

“My grandfather had a lot of photos that were sent home as postcards,” she said.

Edward Brandon Smith grew up in California, joined the California Army National Guard years before an assassination triggered World War I and fought in the Border War between the United States and Mexico sometime around 1912-1913. The Border War consisted of military engagements that occurred during the Mexican Revolution.

“I want to do more research on the Border War,” she said. “He had some gruesome photos, but they’re fascinating.”

In 1918, the Department of War activated his unit. The soldiers rode a train to Nova Scotia, Canada, and then boarded a ship to England. From there they crossed in a ferry between the English Channel to the French coast.

“He was a mechanic, and I still have his mechanical manuals,” Smith said, noting her grandfather belonged to the 141st Aero Squadron, part of the aerial warfare service of the United States Army.

Organized in January 1918 at Rockwell Field, Calif., the 141st Aero Squadron fought on the Western Front.

The photos told the story of her grandfather’s time in France. Each postcard of a specific event had commentary written on the back. During Thanksgiving 1918, Smith knew her grandfather and the other soldiers had a nice turkey dinner.

Another, though, told of death. Smith learned from her grandfather’s photos that his commander died in a plane crash one day before he was scheduled to return to the U.S.

The back of the postcard read, “Capt. Hobart Baker killed in France. He had orders to leave for home. Lost control of the aircraft at 300 feet.” The final comment said goodbye to Baker’s girls.

By World War I standards, the Princeton University graduate was an ace, having shot down 19 enemy aircraft and four observation balloons. On Dec. 21, 1918, he took controls of a recently repaired plane that needed a test flight. A heavy rain during flight caused the plane to stall a quarter of a mile from the field, and it nosedived into the ground. Alive when his men reached him, he died, according to accounts, in the ambulance.

The Pennsylvania native was 26 years old when he died at Toul, Meurthe-et-Moselle, Alsace-Champagne-Ardenne-Lorraine. Before he enlisted in the military, Baker earned a reputation as an outstanding ice hockey player, and in 1945, he and eight other players were inducted into the first class of the Hockey Hall of Fame.

Smith said her grandfather returned to California the following year.

“He was a regular guy, and I think he was soft spoken,” Smith said, adding she never met him.

Her grandfather, who was too old for service during World War II, died either in 1946 or 1947.

The families knew the fate of Edward Smith and Hobart Baker when each died. For those at the latest NNVMC service, the nine veterans’ remains had either stayed in a mortuary or at another location, never claimed or identified.

At the November Missing in Nevada service, NVC spokesman Tom Draughon said the coalition, the cemetery and various funeral homes have identified 297 veterans for interment in Northern Nevada. He recognized Lynda Freeman, who has spent countless hours in obtaining names and checking their military status for burial at the NNVMC.

“Our goal has been there will never be a forgotten veteran in the State of Nevada,” he said.

The following were interred at the end of the latest Missing in Nevada service: