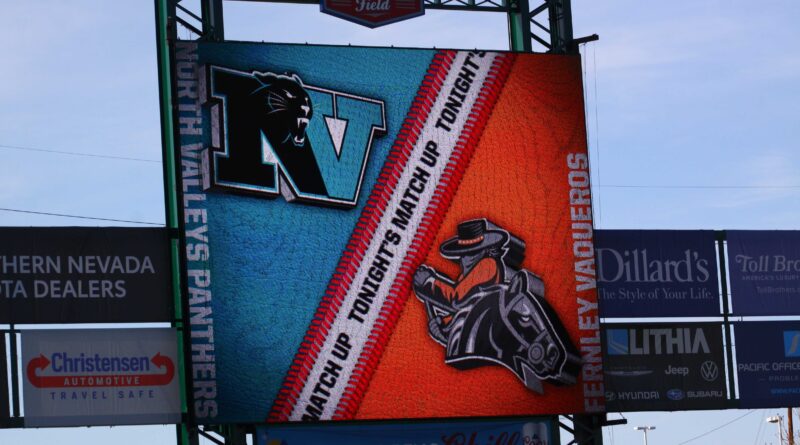 Every kid who grows up playing baseball dreams of one day being on a professional field, making that long throw across the diamond or from the outfield, of standing in the batter’s box and knocking a pitch into that wide open space.

For the second straight season, the Fernley High School baseball team got that experience, and for the second time in a row, came home with a win at Greater Nevada Field, home of the Triple A Reno Aces, this time a 5-2 decision over North Valleys on April 7.

“It makes baseball be like what you thought of as a kid,” senior Ryan Gamsby said. “Like, I could be that one day. It’s fun.”

“It makes me want to go on to the next level, really,” senior Julian McIntyre said.

Vaquero players said they were grateful for the experience of playing on the professional field, and were determined not to spoil the opportunity by losing.

“We literally said we are not losing this game,” Gamsby said. “Basically, we knew we were going to win today.”

After North Valleys pushed across a run in the top of the fifth, another double by McIntyre sparked a two-run rally. Gamsby singled to center to score McIntyre, then a wild throw on a pickoff attempt went down the right field line and Gamsby came all the way around to score.

“You’ve just got to be the guy to pick it up, and once you pick it up then everybody else starts to follow,” McIntyre said. “That’s why I’m leading off, to get everybody going.”

The Vaqueros will be back in action Friday, starting a three-game series at Lowry, with a single game at 3 p.m. Friday and a doubleheader at 11 a.m. Saturday.

The Vaqueros have the early lead in the league standings, and having won two of three against Fallon to start divisional play, feel like they are poised to finish strong.

“I feel like we’ve already got the best team out of the way already,” Gamsby said. “Otherwise we should be good, as long as we can put the bat on the ball.”