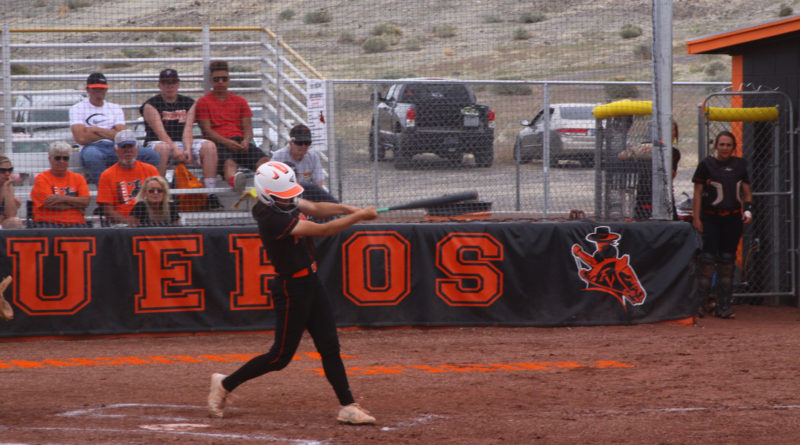 For five consecutive seasons, the Fernley softball team has reached the 3A State Tournament. The Vaqueros enter this week’s Northern 3A Regional Tournament in Fallon as the No. 1 seed as they aim for their sixth straight trip to State.

The Vaqueros open the tournament at 2 p.m. Thursday against the winner of the 9 a.m. game between No. 4 seed Dayton and No. 5 seed Elko.

The two teams that advance to the championship will both qualify for the 3A State Tournament scheduled to be played May 17–19 at Reno High School.

“It should be a good, competitive weekend and the two teams playing the best are going to come out, and hopefully we’re one of those two,” Fernley coach Diane Chapin said.

The Vaqueros clinched the regular season league championship and No. 1 seed for the tournament by sweeping a three-game series from Elko last weekend. Fernley won Friday’s game 7-1, and both games of Saturday’s doubleheader, 9-3 and 9-1.

In Friday’s game, the Vaqueros got six of their runs in the bottom of the third.

Hailee Edgar, Lexi Nelson and Colby Johnson each drove in two runs for Fernley, providing the support for pitcher McKenna Montgomery, who struck out six.

The Vaqueros used a five-run second inning to key the win in the first game of Saturday’s doubleheader.

In Saturday’s second game, Fernley scored three runs in the first inning, two in the fourth, and put the game away with four in the sixth.

Edgar and Jones both drove in three runs, and Ariana Ruiz was the winning pitcher, giving up seven hits with two walks and four strikeouts.

She said the Vaqueros are playing well defensively heading into the tournament, so she said pitching and hitting will be the keys for them to advance.

“If we’re on, one through nine, we’re going to be tough,” Chapin said.