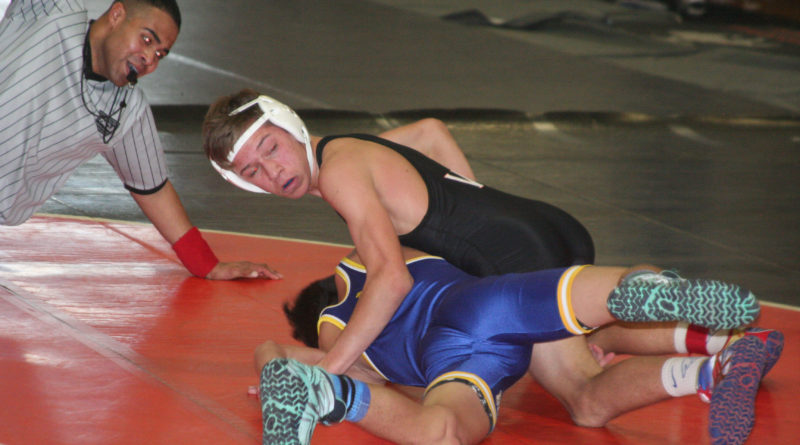 The Fernley High School wrestling team finished fifth in last weekend’s 3A North Region Tournament in Truckee, and three wrestlers qualified for this weekend’s 3A State Championships to be held Friday and Saturday at Spanish Springs.

A.C. Reyes (182 pounds), Lonnie Slapinski (heavyweight), and Jared Caulk (113) each qualified for the tournament by finishing third in the regional tournament.

Coach Scott Gillespie said the Vaqueros wrestled well, but were hurt by the current NIAA playoff configuration that sends only 3 wrestlers from the North to State, with the South sending 5 qualifiers.

“A few very legit wrestlers will be unable to wrestle at state,” Gillespie said. “I have no doubt that, in most cases, our 4th place kid would dominate the South’s 5th. but hey, that’s the way things go with the way the NIAA is currently setup.”

Weigh-ins will begin at 11 a.m. Friday, with the National Anthem scheduled for 12:45 p.m. and the championships quarterfinals starting at 1:30 p.m.

Saturday weigh-ins will be conducted at 8 a.m., with wrestling starting at 9:30 a.m. The championship finals are scheduled for 2:30 p.m. Saturday.

Caulk will start the tournament with a match against Garrett Leavitt of Boulder City, the South No. 2 seed. Reyes will face Cache Burnside of Virgin Valley in the first round, while Slapinski’s first round opponent will be Michael Kaposta of Boulder City.

Spring Creek was the regional champion with 247 team points, with Fallon second at 214 and Lowry third with 207 points. In finishing fifth, Fernley scored 108.5 team points.

“I fully expect that the top 5 teams at the state tourney will be mostly northern teams,” Gillespie said.