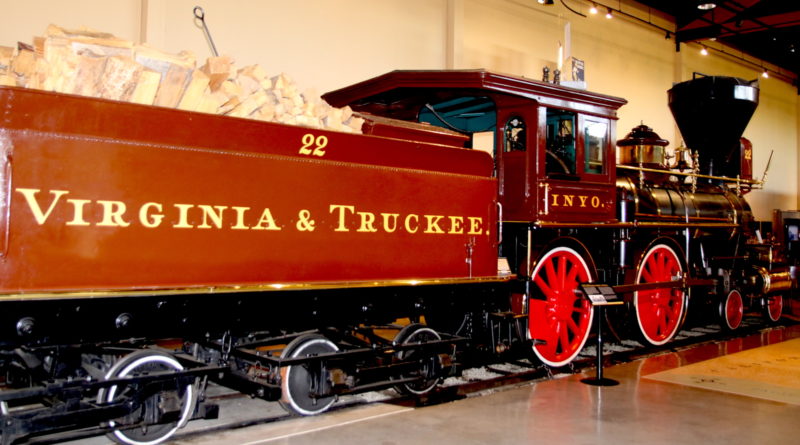 FALLON — A feat as worthy as man walking on the moon 50 years ago came almost one century before that monumental achievement when East met West.

On May 10, 1869, a golden spike driven into the connecting tracks signaled the completion of a railroad line that bridged both coasts at Promontory, Utah. The achievement resulted from the Pacific Railroad Act that chartered the Central Pacific and the Union Pacific railroads to build a transcontinental railroad that would link the United States from coast to coast. As with the building of the transcontinental Lincoln Highway in 1913, railroad construction crews encountered difficult terrain in forging ahead with their Herculean task.

“The completion of the transcontinental railroad was nothing short of putting a man on the moon,” said Dan Thielen, director of the Nevada State Railroad Museum who recently presented an informational program on the railroad’s importance during the 1800s. “The whole world paid attention to that, and then the building of the Suez Canal at the same time.”

Construction on the canal, which connected the Red to the Mediterranean seas via the Isthmus of Suez to shorten both travel time and distance, took a decade to complete, and the official opening came on Nov. 17, 1869. Thielen said the completion of the transcontinental railroad tremendously shortened travel time with a journey crossing the United States reduced from three months to 11 days.

“People came from all over to Promontory Point,” Thielen said. “A coach carried (former California) Gov. Leland Stanford, and a separate car carried his food. The coach was part of the Virginia & Truckee Railroad.”

Stanford, an insurance and industrial tycoon and head of Central Pacific Railroad in the 1860s, oversaw the building of the western section of the transcontinental railroad over the rugged Sierra Nevada mountains and across Northern Nevada and Utah. The western section linked with Union Pacific’s track that began construction at Council Bluffs, Iowa/Omaha, Nebraska.

Stanford presided at the Utah ceremony and also drove in the final spike.

“It’s a big part of Nevada and made an impact on the people and Nevada in particular,” Thielen said of the transcontinental railroad’s completion.

When Nevada entered the Union as the 36th state in 1864, the Civil War waged in the East. Of all the states, only Nevada was not accessible by a waterway. The Silver State had limited rail activity with ore cars carrying gold and silver from the Comstock to Washoe Valley, which was eventually sent to support the Union army. Thielen said Lake’s Crossing, which changed its name to Reno in 1868, became a major hub connecting the Comstock for transporting the ore for the war effort.

Three years after the Civil War, the Central Pacific Railroad established a rail station in Reno. Eventually, crews completed a rail line between Carson City and Reno that streamlined the commute  time from the state capital to Nevada’s most important city on a major railroad line.

Nevada and Nebraska, according to Thielen, recognized the railroad’s importance to their development and are the only two states that have a locomotive on their state seals.

With the completion of the transcontinental railroad 25 years later, Thielen said towns began to spring up along the tracks. Families, in turn, homesteaded on 160-acre tracts near the railroad. Many stops provided water for the steam locomotives that delivered commodities such as food and manufactured goods to residents. Thielen said there was no restriction on trade from the east to west coasts. In addition to increasing trade, the railroad, for example, became the largest employer in Sacramento, Calif., after 1869.

“The railroads had to support the populations,” Thielen said.

The railroad also figured in the sporting world. When boxers James J. Corbett and Bob Fitzsimmons fought in Carson City on St. Patrick’s Day 1897,  the San Francisco Examiner wanted to be the first major newspaper to report the outcome and transmit photographs. Thielen said the Examiner hired a locomotive and coach to transport a reporter and photographer back to the Oakland pier and then ferried him across the bay to San Francisco, a trip that took six hours.

Thielen said the railroad has a storied history in the United States’ western expansion, particularly after the Louisiana Purchase in 1803. At the time, he said 90 percent of the population farmed or were plantation planters. Thielen said the land west of the Appalachian Mountains was “barely settled” but the western immigration began toward the country’s interior.

“The concept was Manifest Destiny,” Thielen pointed out. “The U.S. is clearly going past the 13 colonies to build state in the middle of the country.”

In the early 1830s Thielen said President Andrew Jackson considered both the railroad and steam power to be the glue to keep the United States together. As the country pushed westward and industrial production increased, Thielen quoted a journal selection written in 1844 by American author Nathaniel Hawthorne, who derided the country’s changing landscape.

“But hark! there is the whistle of the locomotive — the long shriek, harsh, above all other harshness…it brings the noisy world into the midst of our slumbrous peace.”