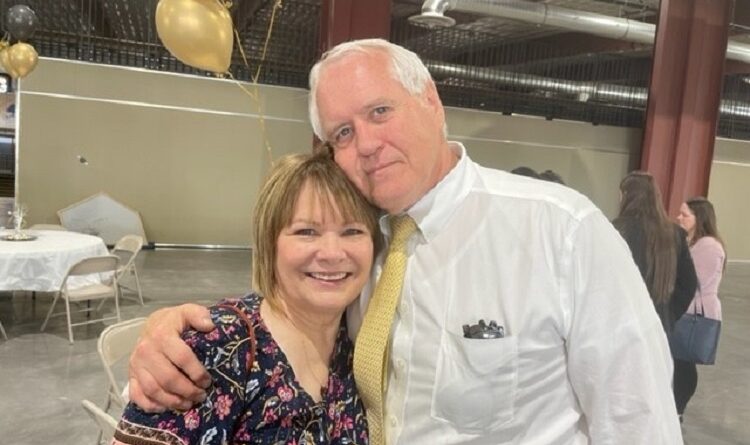 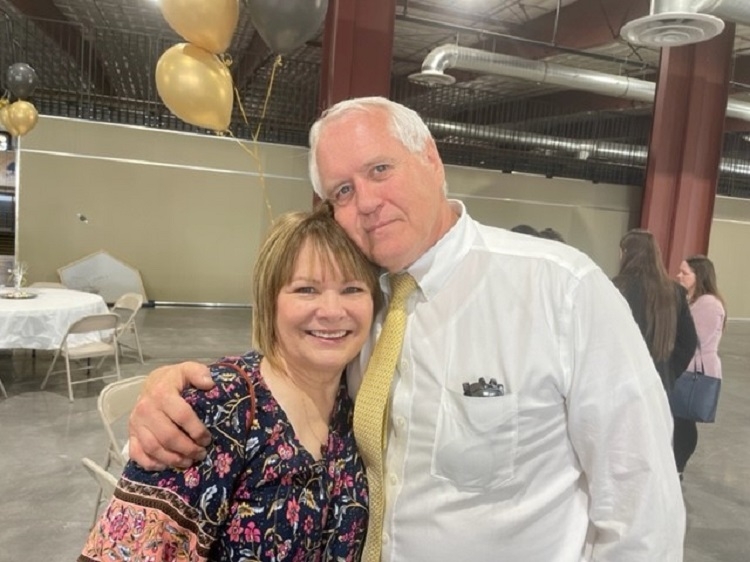 Danelle and Rusty Jardine at the retirement luncheon on Thursday. Photo by Rachel Dahl

Rusty Jardine has had a long and noble career of public service, dedicating his efforts and knowledge to serve several rural Nevada communities. He wraps up that career this month, retiring from Truckee-Carson Irrigation District where he served as General Manager for the past twelve years.

“Rusty is one of the kindest, giving people I’ve ever met,” said President of the TCID Board, Eric Olsen with a great deal of emotion as he welcomed a large group of people who attended a retirement party for Jardine on Thursday. “Rusty doesn’t change. He is totally genuine, and he always sees the best in everyone. He is optimistic and happy, and his gift of gab is legendary.

Attending the luncheon were representatives from the Nevada congressional delegation, the Bureau of Reclamation, National Water Resources Association, several former colleagues, local elected and appointed officials, and the staff from TCID.

Rusty had been working in Elko as a juvenile probation officer and served as a hearing officer before he attended law school. “One day when I was conducting a hearing, I realized I had served all around a courtroom,” said Jardine. “I had been a witness, an officer, but the one thingI could not do was practice law.” Jardine and his wife Danelle had four children when they decided to take on law school in Moscow, Idaho. “The first week I got up before 4 am and started in on reading assignments and I remember thinking, ‘What have I done…’”

After law school, Jardine served as a law clerk for Judge Wagner in Lovelock who covered three counties, Lander, Humboldt, and Pershing. “It was a great experience. After court, we would go back to the office and he would ask me, ‘What did you see, could something have been done different.’” At the time Judge Wagner owned an apartment complex where the Jardines stayed while Rusty studied for the bar exam. “One apartment came vacant, and he maintained it so I could go study for the bar in quiet.”

Jardine said that was a real blessing. At the bar exam during the first session, he finished before everyone else. “I left there agonizing about what did I not answer correctly, but it turned out well.”

The first job Jardine took was working for Belinda Quilici, serving as an Assistant District Attorney in Pershing County. He then worked for the Attorney General’s office, serving in Ely which afforded him the chance to practice in every judicial district in the state.

He worked in private practice with Jim Wilson in Carson City, who eventually became a district judge, and then it was off to Fallon where Jardine served eight years with the Churchill County District Attorney as the Chief Civil Deputy DA, representing the commissioners and all the boards.

“You keep stealing our talent,” said Arthur Mallory, the current Churchill County DA at a recent county commission meeting where Jardine had made a presentation. “We brought you in and then you went to TCID and now you’ve stolen Ben,” he joked.

Ben Shawcroft will replace Jardine as the General Manager of TCID. He has been serving as the Civil Deputy DA, the same position Jardine held with the county before heading to TCID.

Jardine said he went to TCID at an interesting time. He walked into ongoing litigation on the breach of the Truckee Canal, as well as the Truckee River Operating Agreement. “It was an exciting time and we were able to settle several long-standing litigation.”

But now he is looking forward to possibly teaching some college courses and of course there are always cars. He has traded in his red corvette and is now working on rebuilding a 1930 Ford Coupe.

“Rusty came into the TCID at a very dark time,” said Ernie Schank, former President of the TCID Board. “The Project’s age had exhibited itself with two failures, political pressure was unyielding, and litigation costs were eating us alive. Rusty brought a new vision, new hope, and an attitude that together we can solve the problems. His 12 years of leadership have shown us a brighter day. We still have tasks to complete, but his legacy of kindness and finding common ground will allow this Project to continue to bless this community into the future.”

Christine Arbogast, representing the National Water Resource Association board, recognized the value Jardine brought to TCID as well as western water all together. “TCID has the most unique relationship with Reclamation. It takes a special talent and leader to guide such a system. Through his participation with NWRA, TCID is so well represented by Rusty. The importance and contribution to irrigated agriculture to the west and all of the United States is critical. The relationship with Reclamation is critical and has been recognized by Rusty. TCID is the true birthplace of water in the west.”

Olsen thanked Jardine for a job well done. “Thank you for help with the awful lawsuits and the tough financial times. Thank you for taking care of the details of TCID and thank you for carrying the heart of the mission of TCID, to keep agriculture in the Lahontan Valley.”