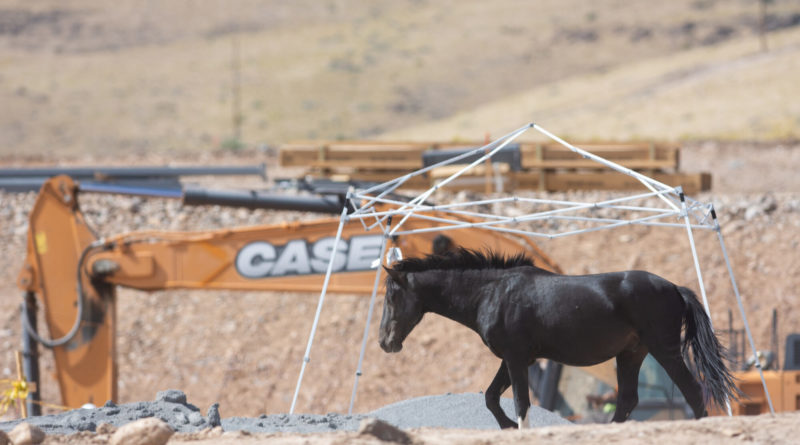 Storey County commissioners voted Tuesday to oppose “separatist governing control” within their jurisdiction after Democratic Gov. Steve Sisolak backed a legislative effort that could result in a private tech company and major campaign donor forming its own local government.

Blockchains LLC, a company that owns roughly 67,000 acres of land in Storey County, is asking lawmakers to approve a program that would allow large-scale landowners to create “Innovation Zones.” As described in draft legislation, Innovation Zones would operate as autonomous entities with governmental powers and focus on developing emerging technology.

A Storey County water district, governed by the commissioners, also voted to oppose the legislative effort Tuesday. Both motions direct staff to continue negotiating with the company.

“This would carve out a part of Storey County and create another county, in essence,” Austin Osborne, Storey County manager, said before commissioners voted on the motion Tuesday.

Osborne raised several concerns with the concept of letting Blockchains create a self-governing entity within the county. He argued that the Innovation Zones in the proposed legislation could place strain on the county’s resources and remove a portion of its potential tax base.

In publicly released documents, Blockchains outlined plans to build a “Smart City” on a portion of its land. The proposed residential development, which a company executive said would be located in the Painted Rock area along the Truckee River, would include about 15,000 dwelling units.

For the past decade, Storey County has used tax breaks and expedited permitting to lure major companies, including Tesla, Google and Switch, to set up operations in the county’s Tahoe Reno Industrial Center. The county has focused on growing commercial businesses with a small population. Most workers at the industrial center live in neighboring Washoe or Lyon counties.

But Blockchains wants to build a residential town, and in the past, county officials had told the company they were not interested in a development at the scale they proposed, the AP reported.

“We have great respect for Storey County,” said Pete Ernaut, a lobbyist representing the tech firm. “They have a remarkable track record on permitting commercial development. However, their history of permitting residential or mixed-use development is where we separate.”

In an interview Tuesday, Osborne said the company’s plans to build homes could potentially move forward within a traditional government structure. Storey County’s 2016 Master Plan, he noted, discusses the construction of a residential and mixed-use development in Painted Rock.

“It’s something, with an appropriate proposal, we would certainly look at,” he said.

A Sisolak spokesperson did not respond to a request for comment. The governor unveiled the legislative proposal on Friday afternoon at a panel with his economic development czar and a private economic analyst. Sisolak asked for people to keep an “open mind” about the concept. Blockchains and its CEO Jeff Berns donated tens of thousands of dollars to help elect Sisolak.

The legislation has not been formally introduced.

Osborne and the county commissioners also questioned whether the legislation was necessary, given that Storey County already has a permissive regulatory environment known for tilting in favor of encouraging private development, a trend dating back to the Comstock mining boom.

“Storey County is the poster-child for this sort of thing,” Osborne said. “There is no place in Nevada that has fast permitting, permitting flexibility, nimbleness that Storey County does. We are well-known for that all over the United States as well as locally. We are the innovation zone.”

In 2019, The Nevada Independent reported on how private and public interests were blurred in the development of the industrial center, where Blockchains owns the majority of its land and is seeking even greater autonomy to pursue a master-planned development that includes housing.

“We often take heat for being too flexible and moving too fast,” Mitchell said.

Mitchell, along with Storey County Commission Chairman Jay Carmona, signaled a willingness to work with Blockchains. The motion directs staff to engage in a “good-faith” dialogue with the company. The motion also asks staff to work with lawmakers to support blockchain technology.

“They’ve invested substantially in Storey County, and I’d like us to be able to welcome them and facilitate their success as a productive, contributing member of our community like we have with our other corporate citizens,” Mitchell said.

But the commissioners said they could not endorse the company forming its own government, adopting language that opposed “separatist governing control and carving up of Storey County.”

Mitchell and Carmona both voted for the motion. Commissioner Lance Gilman was not present at the meeting. Gilman, who represents the industrial park’s master developer and also serves on the County Commission, helped sell the roughly 67,000 acres of land to Blockchains in 2018.

In a statement, Ernaut said the company is open to working with the county moving forward: “A smart city with 35,000 residents is essential to the vision of this Innovation Zone, which makes permitting a city of this size key to this discussion. We understand their initial reaction to such a unique idea, and look forward to finding a path forward that works for everyone.”

The commissioners adopted a similar motion to oppose the legislation at a separate meeting on Tuesday. The Storey County Commission oversees the water district for the industrial center, a utility that serves the Tesla Gigafactory, a Switch data center and other commercial businesses.

According to a map that was presented at the meeting, all but 2,200 acres of Blockchains’ land is within the water district’s service territory, raising questions about how they would develop the residential land. The district was mainly formed to provide water connections for industrial use.

The company owns a majority of land within the water district’s service territory. There remains uncertainty about how the district would operate if Blockchains formed its own Innovation Zone.

“They would be a huge user of water in the area,” Will Adler, a lobbyist for the water district, said at the meeting. “And it’s kind of unclear whether you would have to provide that water initially or not, depending on how this is developed or not, because of that uncertainty.”