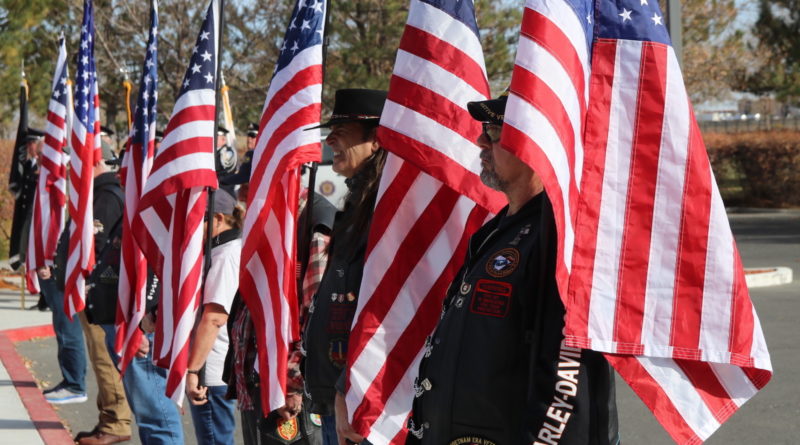 FERNLEY — A slight wind rustled the leaves near the pavilion, while the haunting sounds of Taps permeated the autumn afternoon.

After two Nevada Army National Guardsmen ceremoniously folded the flag, Spec. Gilbert Ortega walked to a couple sitting in front and presented the United States flag to a son who journeyed miles to attend October’s military service for unaccompanied veterans at the Northern Nevada Veterans Memorial Cemetery in Fernley.

This was a different day, though, for the veterans who attend such an event because SS1 Walter Vancil’s son drove from his Stockton, Calif., home to honor his father. Walter Vancil IV and his wife attended the afternoon service for Vancil’s father, Walter Vancil III, who had served first in the U.S. Navy and later in the U.S. Coast Guard. Vancil said he could’ve had a private ceremony at the cemetery, but the thought of his father being recognized with other veterans made more sense.

“This a beautiful cemetery, a beautiful ceremony,” Vancil said, adding he feels a peace of mind his father will be among other veterans.

Born and reared in California, the older Vancil served in the Navy for eight years as a gunner’s mate and boiler tender, saw action in the Mekong Delta during the Vietnam War, before leaving the military. Yet, Vancil missed the camaraderie of the military and joined the U.S. Coast Guard, eventually putting in 40 years between the two branches. Later in his life, he retired to Silver Springs, less than a half-hour away from the NNVMC.

“It seems like he was in the military his entire life,” said Vancil, who served in the U.S. Army, having obtained the rank of staff sergeant.

Vancil said his father branched out to another specialty in the Coast Guard. In addition to serving as a gunner’s mate, he became a chef and attended culinary school in Chicago. Among the guests he fed were the Secretary of Transportation, which at the time oversaw the operations of the U.S. Coast Guard, and President Ronald Reagan.

The next service at the NNVMC will be a Missing in Nevada remembrance on Friday at 2 p.m. to recognize nine veterans in a one-hour service with full military honors. This will be the 20th mission at the NNVMC to honor veterans whose remains have been in the care of a local mortuary but remained unclaimed, some for as many as three and four decades for various reasons.

Many veterans remembered during this month’s Missing in Nevada ceremony have had their remains identified and unclaimed. With the passage several years ago of a Nevada state law, the remains can now be released from a funeral home so the NVC can conduct a military service with an eulogy, a 3-volley salute, the playing of “Taps” and final internment at the cemetery.

“This will be our 20th mission giving final honors to nine of our forgotten veterans, bringing to date a total of 297,” said spokesman Tom Draughon. “We need to never forget the service to our country by these veterans.”

Draughon said the public in encouraged to attend Missing in Nevada and pay their final respects to the nine veterans. They include one who fought in World War, six from World War II and two from Vietnam.