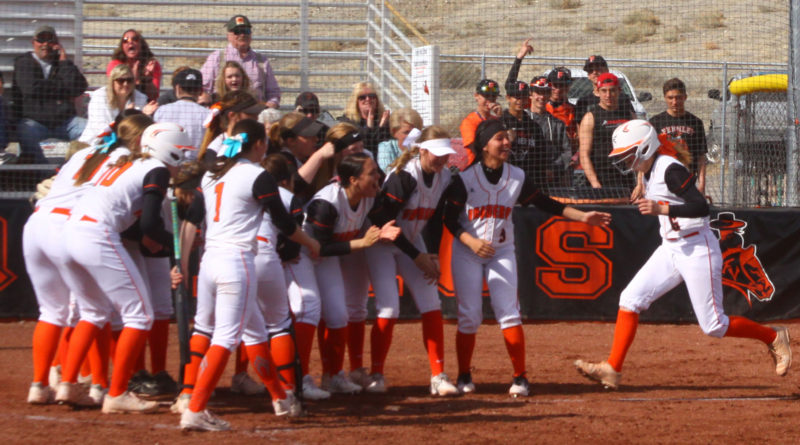 The first of what figures to be several meetings between the Fernley and Fallon softball teams went to Fernley Tuesday afternoon.

The teams will meet again for single games April 10 and April 24, all in Fernley.

The game befitted two intense rivals who have ruled the Northern 3A for the past several season.

Last year, Fallon defeated Fernley in all three regular season meetings and twice in the regional tournament, before Fernley beat the Greenwave twice in the state tournament to claim the state championship. Both teams have won state championships after being regional runner-up to the other and expect to be playing each other in May for high stakes, so neither Fernley coach Diane Chapin or Fallon coach Kasey Chu was ready to attach any significance to a single game in march.

“These guys are going to be our biggest competition,” Chu said. “It’s good for our girls to see it. They know what to expect and I think we’re on the up from here.”

Fallon got on top early, and with both Montgomery and Cornmesser dominating in the circle, it looked for a while like one run might be enough.

Fallon got a run first, in the top of the third. Stacy Kalt singled to lead off the inning, and after a failed sacrifice bunt resulted in a popout, Caitlyn Welch walked to put runners on first and second. Cornmesser flew out to left field for the second out, but Fernley leftfielder Reese Jones’ throw back to the infield flew over Montgomery’s head, and Kalt went to third. Kalt then stole home on a delayed steal, breaking for the plate after the catcher’s throw back to the pitcher.

Aside from a hiccup in the bottom of the second when she walked two consecutive batters, Cornmesser mowed the Vaqueros down without a hit through the first three innings. She started the fourth with two strikeouts, her fourth and fifth of the game, before Jones broke up the no-hit bid and tied the game 1-1 with a with a solo home run, a towering

shot that dropped beyond the fence just left of straightaway center field.

“Thank God she did that after she threw it over the pitcher’s head,” Chapin said,

After a couple of early wobbles, allowing two Fallon baserunners in the second inning and a run in the third, Montgomery settled In and allowed only two more baserunners through the fourth, fifth and sixth innings. One of those was erased by a double play, when Jones threw a runner out at first base from left field.

Fernley broke the tie in the bottom of the fourth, when Skylar Gothan walked, went to second on a sacrifice bunt by Lexi Nelson, took third on a groundout by Natalie Stewart and scored on a wild pitch.

Fallon got a pair of two-out singles in the seventh by Aspen Mori and Kalt, but left them stranded.

“We didn’t have anyone come up really big for us,” Chu said. “Even the small game, we couldn’t get down, so we definitely have a lot of little things to work on. Especially with a team like this we’re not going to get a lot of chances, but we had a lot of baserunners that we left on base, for sure.”

The loss dropped Fallon to 3-1 in the Northern 3A, 4-5 overall, while Fernley is 5-1, both in league play and overall.

Fallon will host Truckee for three games this weekend, a single game Friday and doubleheader Saturday, and play three makeup games against Sparks next week.

Fernley is headed to Las Vegas and begins play Thursday in the Las Vegas Spring Jamboree against El Cajon, (Ca.) Valhalla at 10 a.m.

Weather hampered the opening week of the season, and the Vaqueros began the season splitting a doubleheader against Lowry, winning 2-0 and losing 12-10 on March 17.

Last week’s games, scheduled at Truckee, were moved to the Golden Eagle Sports Park in Sparks because of weather. The Vaqueros swept that series, 24-0, 22-0 and 15-0.