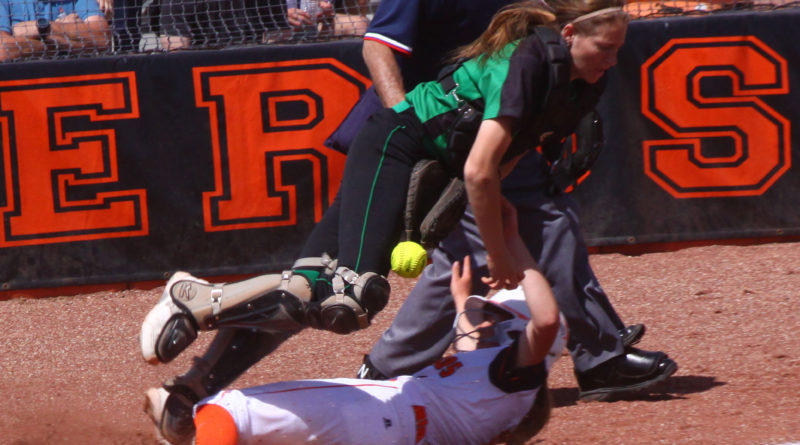 If the past several seasons have proven anything, it’s that what happens during the regular season between Fernley and Fallon doesn’t mean anything.

The two sides will find out next month if that holds true this season.

Fernley swept a doubleheader from Fallon Tuesday afternoon, 6-4 and 4-0, to sweep the season series, and tighten its grip on first place in the Northern 3A.

But Fallon and Lowry will face each other in a three-game series this weekend, and one of the teams will lose at least two games and fall off the pace.

Fallon and Fernley have ruled the Northern 3A in recent seasons, but regular season outcomes have not foreshadowed postseason results. Last year, Fallon beat Fernley five consecutive times, three in the regular season and two in the regional tournament, before Fernley won two meetings in the state tournament to bring home the championship.

“That’s what I just told them,” Chu said. “This is done and over with, and we’re going to see them again in some crucial games, and that’s what’s going to count.”

In the first game, Fernley scored all six runs in the first inning, a rare outburst against Fallon’s Faith Cornmesser, a pitcher who has been a difficult matchup for the Vaqueros in the past. In this season’s earlier meeting, Cornmesser had a no-hitter going until Reese Jones broke it up with a home run in what would become a 2-1 Fernley win.

This time, the Vaqueros combined a couple of well-placed hits with couple of uncharacteristic wildness from Cornmesser and turned it all into six runs, after Fallon had taken a 1-0 lead in the top of the first inning.

“For us to come right away and hit her, which we struggled in the past, we only got a couple hits last time we faced her, so for us to get hits right away was big,” Fernley coach Diane Chapin said.

A single by Skylar Gothan, an infield hit by Macie Kirk and a pitch that hit Jones loaded the bases with nobody out, then Cornmesser walked Colby Johnson to tie the game. Natalie Stewart followed with a little blooper that dropped just beyond the infield dirt in left field to plate Kirk, then Jones scored on a bunt by Lexi Nelson, when Jones upended the Fallon catcher, who couldn’t hold onto the ball.

One out later, Hannah Curtis followed with a two-run single for a 5-1 lead, and finished the rally with a run-scoring single to make it 6-1.

Fallon scored first on an RBI-single by Stacy Kalt, driving in Caitlyn Welch, who had singled and taken second on a wild pitch. But Kalt was caught in a rundown trying to go for a double, ending Fallon’s chances for a big inning.

Fallon got a run back in the third, on a single by Welch that drove home Lorynn Fagg, and had runners on second and third with one out, but the next two batters hit foul pop outs.

In the top of the seventh, Kalt hit a sacrifice fly with runners on second and third and no outs, cutting the lead to 6-3, and another run scored on a wild pitch, but the game ended when Macie Anderson was thrown out rounding first base after a single.

“I thought overall everything they did pretty well,” Chapin said. “We got enough runs to keep it going, and the pitchers did their jobs.”

The wins came after the Vaqueros’ sweep of a three-game series at Sparks last weekend. Fernley won Friday’s game 11-0, and both games of the doubleheader Saturday, 14-4 and 17-0.

The Vaqueros play at South Tahoe this weekend, a single game Friday at 3 p.m. and a doubleheader Saturday starting at 11 a.m.