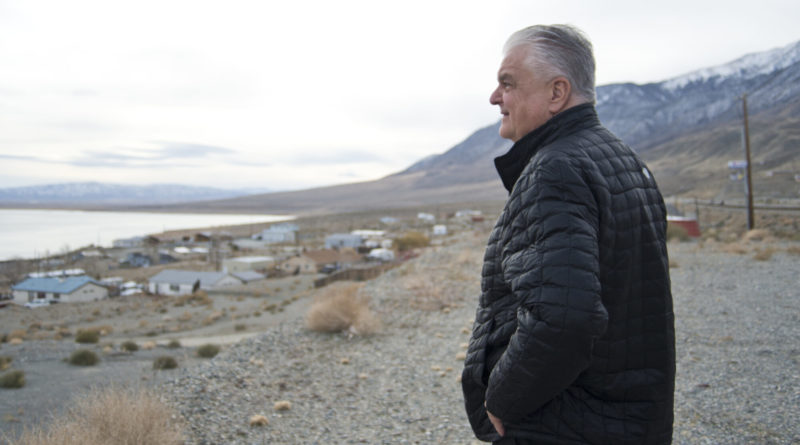 Gov. Steve Sisolak said it’s not yet clear what the week-old effort to reopen some Nevada businesses has done to infection metrics or when the state will move to Phase 2, but he said health indicators are pointing in the right direction.

Sisolak held a press conference in Carson City on Friday as an update on how Phase 1 has played out in the state. He pointed out that the rate of positive results out of all people tested since the pandemic began continues a 20-day downward trajectory, and that the Nevada Hospital Association says COVID-19 hospitalizations “are not significantly impacting the hospital system.”

“Our goal is to continue reopening more of Nevada’s economy in a safe and responsible manner … but it’s too early to make any determinations,” he said.

Sisolak announced last week that the state would move to a limited reopening of businesses on May 9, after nearly a two-month long shutdown of most aspects of public life and business activity in the state in hopes of slowing the spread of COVID-19. Phase 1 guidelines allow most retail businesses to reopen, as long as they don’t exceed 50 percent capacity, require employees to wear masks and follow various safety and social distancing guidelines.

Hair and nail salons, as well as some dine-in restaurants, are also allowed to reopen but directed to follow safety precautions. Sisolak said the Division of Industrial Relations reported that a majority of businesses are complying with the rules.

“I’m really pleased to hear this and I’m proud of the fact that they took this so seriously,” he said. “We know that there are some that are not in compliance right now. Unfortunately, their negligence puts Nevadans at risk. And so there will be repercussions as a result of that.”

But the governor said it was still too early to discuss Phase 2 and additional steps to open up sectors of the economy, saying he wanted to have at least two weeks’ worth of health care data at hand before making a decision.

“Those decisions will be forthcoming but we need the data in order to move forward on any more reopenings,” he said.

Asked about whether churches would be allowed to open to larger in-person services if they implemented social distancing measures — a request articulated by a coalition of 190 faith leaders in a letter dated Thursday — Sisolak said he didn’t plan to add more organizations into Phase 1.

“No one wants churches to open more than me, and my mother probably more than me, because she doesn’t think it’s the same watching Mass online as it is attending in person,” he said.

But he argued that it’s difficult to socially distance in a house of worship and that many congregations include older people who are particularly vulnerable if they catch COVID-19. He said drive-in services are allowed and there are discussions about outdoor services, but Phase 1 “is what it is right now.”

Nor was there concrete guidance on when schools would be allowed to reopen, especially as evidence emerges of an illness among children called multisystem inflammatory syndrome that appears to have a nexus to the coronavirus.

“That’s going to be another one where we don’t just come up with these ideas or pull them out of the air,” he said, noting that while discussions are happening, “as of today, I’ve not been presented with a plan.”

Sisolak said members of the “LEAP” committee — Local Government Advisory Panel, led by Clark County Commissioner Marilyn Kirkpatrick and Eureka County Commissioner J.J. Goicoechea — were taking recommendations on different types of businesses that may be allowed to reopen in Phase 2 and evaluating whether limits on capacity could be safely changed.

“That’s gonna be difficult to increase capacity and at the same time maintain social distancing requirements,” he said. “So it’s kind of going to be dependent upon the data that we get continuing to come forward.”

Sisolak also touted the number of tests performed by the state — more than 17,000 last week. Asked why Nevada’s rate of testing lags behind the national average, the governor said he expects said capacity is growing and will expand further as more workplaces are testing their employees on a large scale.

“Not that this is a race, but we’ll be able to catch up with the other states,” he said.

The state averaged about 2,500 people tested per day in the last week, and he said the state probably already has the capacity to test 4,000 people a day — if not now, then by next week. But he acknowledged the logistical barrier of people physically going to a testing site and actually getting 4,000 people a day to submit to the test.

“We do have capacity, but people have to go get tested,” he said. “They have to get in their car and drive down there. I encourage them to do that.”

On the Culinary Union’s recommendation that all employees are tested before returning to work, Sisolak said many companies are planning to do so in plans submitted confidentially to gaming regulators but that Gaming Control Board Chairwoman Sandra Douglass Morgan is making those decisions.

He also used the press conference to exhort Nevadans to wear a face covering in public. He urged those who don’t know anyone personally who has had COVID-19 to remember the story of Marine veteran Ronald Pipkins — the first coronavirus patient in Nevada who spent about a month in a coma and fought to recover because he hoped to someday meet his grandchildren.

3 thoughts on “Sisolak: Initial signs following Phase 1 reopening are positive, but no timeline on moving to Phase 2”