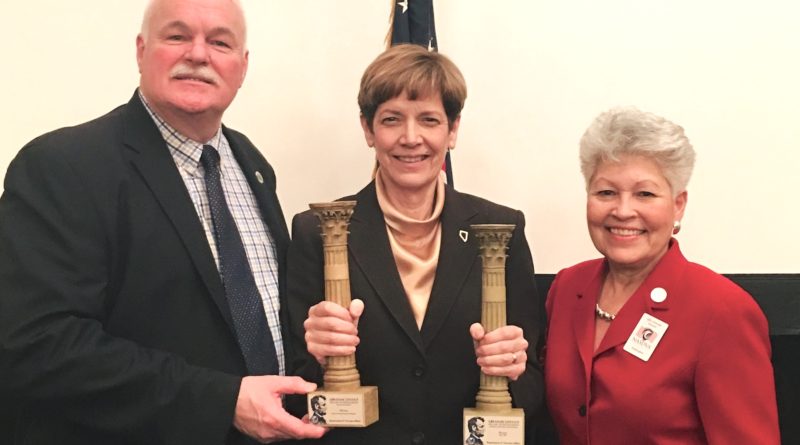 Veterans and Military Day at the Legislature is March 20, and currently, only a half-dozen individuals have signed up for the United Veterans Legislative Council’s (UVLC) pairing of veterans to lawmakers in both the Nevada state Senate and Assembly, according to the Nevada Department of Veterans Services.

This portion of Veterans and Military Day at the Legislature raises awareness of veterans and veterans’ issues to Nevada lawmakers. In order to be paired with a lawmaker, you must contact Mitch Roach at (702) 690-6145 or email him at mitch.roach@aol.com as soon as possible because the Sergeant at Arms in both the Assembly and Senate must conduct a background check and create personalized certificates for participating veterans.

The deadline to contact Roach is March 13. The NDVS needs participation from the military community. During the pairings, the veterans are introduced individually in both houses and concurrent resolutions in support of veterans are passed in both chambers.

This UVLC pairing event begins at about 11 a.m. and ends at noon inside the Legislative Building in Carson City. (The schedule depends on the activities of the Legislature that day, so please arrive at least 15 minutes early.)

The NVDS encourages everyone to attend all the activities surrounding Veterans and Military Day at the Legislature. The day begins with coffee and networking near the Veterans Memorial Wall behind the Capitol Building at 8:15 a.m.

At 9 a.m., the opening ceremony, also in front of the Veterans Memorial Wall, features Gov. Steve Sisolak, the Senate Majority Leader, Assembly Speaker and veteran dignitaries. Throughout the day, the Nevada National Guard will provide static military displays outside the Legislative Building and vendors will also be on hand.

A free lunch, outside the Legislative Building begins at noon.

The Vietnam War Veterans Remembrance Day and All Veterans Luncheon is March 30 at the Reno Events Center, 400 Center St. in downtown Reno.

The event begins at 10 a.m. with the doors to the Events Center opening to the public. A Remembrance Ceremony will be conducted at 11 a.m. with the Patriot Guard Riders delivering a ceremonial wreath. Vietnam Veterans of America, Chapter 989 will resent the colors, and, and the guest speaker is retired Brig. Gen. Robert Hayes.

An “All Veterans Luncheon” at 1 p.m. will recognize all veterans of all eras and include special guests including Congressman Mark Amodei. Tickets for the luncheon are $40.

To purchase tickets, go to https://vva989lunch.eventbrite.com

The day will include a display of Vietnam era equipment, including a mobile Vietnam Museum and Huey helicopter. Donations for the helicopter fuel are still being sought. To donate for a gallon of helicopter fuel or more, contact VVAReno989@gmail.com

Veteran support organizations will be on hand to assist veterans filing for benefits and claims, medical outreach, employment educational opportunities and more.

This award recognizes excellence and innovation by honoring outstanding state programs that support veterans within their states.

The 2019 awards were announced by Veterans Affairs Secretary Robert Wilkie during a ceremony held in conjunction with the National Association of State Directors of Veterans Affairs (NASDVA) winter conference in Alexandria, Virginia.

Seven awards were presented to six states with Nevada being the only state to receive more than one award.

NDVS received one award for the creation of a web-based portal that rapidly connects veterans to service officers who answer their questions and help them navigate a complex benefits network. The second award was for NDVS’ “Veterans Legislative Program,” that, in partnership with the Nevada United Veterans Legislative Council, helps veterans and their families across Nevada have a strong voice in the legislative process.

“This recognition is a credit to the amazing and innovative staff at NDVS, as well as to our partners in the UVLC,” said NDVS Director Kat Miller.

“I’m proud of the work of NDVS staff and of Nevada’s commitment to supporting our veterans,” Gov. Steve Sisolak said. “My administration remains dedicated to serving and honoring our veterans, who have sacrificed so much for our state and nation.”

The Pillars of Excellence Award was established by the VA in 2012. NDVS is received its first Pillars award in 2015 for the creation of the Nevada Veterans Advocate Program.

Registration opens at the door on April 6 at 7 a.m. Pre-registration is highly encouraged by going to http://bit.ly/2QXjqZQ.

The NVA course normally consists of 20 modules on-line that allows individuals to learn about benefits and services that veterans, service members and their dependents may be entitled including federal and state benefits.

Each year in-person conferences are held, one Northern Nevada and the other in the southern part of the state.  This free training consists of 12 to 13 of the 20 modules in person.  The rest of the modules can then be taken on line.

Complimentary coffee and snacks will be available each day with a break for lunch.