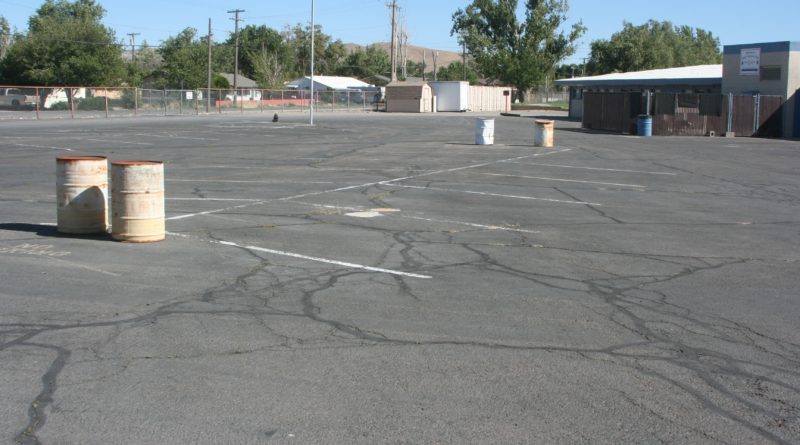 With $400,000 set aside for badly needed repairs of the parking lot at Fernley Elementary School, and a recently completed 10-year master facilities plan that recommends replacing the school, the Lyon County School District Board of Trustees found itself in a quandary.

Ultimately, the board decided to go ahead with the repaving.

The Board of Trustees voted 6-0, with one member absent, to proceed as planned with the repairs to the FES parking lot, at a projected cost of $365,000, since they haven’t yet decided whether to follow through with the recommendation to replace the school within the next four to six years.

As a temporary fix, the Trustees were presented with an option that includes a cape seal of the existing pavement, striping, accessible parking signs, 250 feet of fence and pedestrian and sliding gates, at a cost of $91,000.

The complete reconstruction and other work would have a projected life of about 20 years, according to maintenance supervisor Jim Gleason.

Trustee Neal McIntyre said if the district spent the money it had set aside for the project, and then later closed the school, people would be upset that the district spent money that could have been used in other ways. However, he and the other Trustees decided it’s better to repair the parking lot completely, than to do lesser fixes that would last a few years.

“We can either Band-Aid it or do it right,” McIntyre said. “I believe the school will be open another four or five years, and maybe longer, so I think we should do it.”

“If we just put Band-Aids, we’re just kicking the can down the road,” Trustee Donald Parsons said. “Do it right and get it done.”

Because the project is again delayed, it gave the Trustees the opportunity to consider their original plans for the parking lot.

The 10-year master facilities plan presented to the district in April by the consulting firm MGT of America included approximately $96.7 million worth of projects to be completed in three phases over the 10 years.

The plan recommends replacing Fernley Elementary School with a new elementary school to be built at the site of Silverland Middle School. That would be done in the second phase of the plan, in years 4-6.

Although the Trustees approved receipt of the plan, they have not yet moved forward with any of the specific projects listed in the plan, and have not decided whether to replace Fernley Elementary with a new school, or, if they do, whether it would be as soon as recommended in the facilities plan.