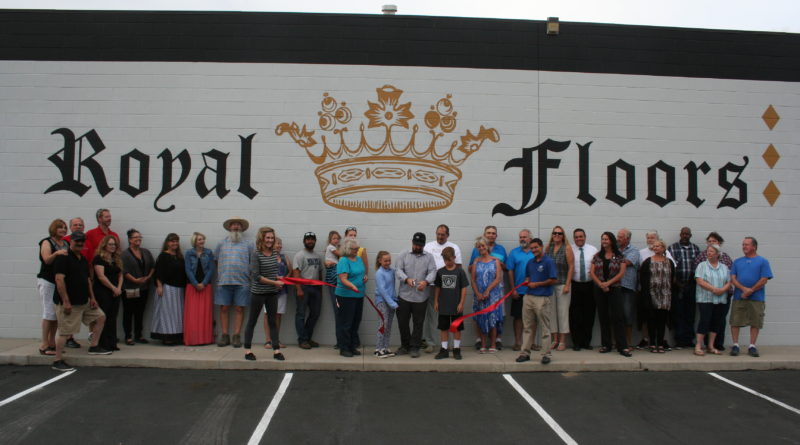 Royal Floors of Fernley was named the Rural Small Business of the Year as one of the small business award honorees for 2018 selected by the Nevada District office of the U. S. Small Business Administration.

Winners will be recognized at a luncheon on May 3 in Las Vegas. The event held annually in conjunction with Small Business Week will begin at 9:30 a.m. with a Small Business Network Expo prior to the award luncheon to be held at noon at the Gold Coast Hotel.

Royal Floors owner Troy Pefley has been in business since he opened Troy’s Carpet Installation and Repair in 2004. He purchased Royal Floors in 2012, and operated the business located on Mull Lane until moving into its new location at 780 Main St. in the building formerly occupied by Napa Auto Parts in mid-July.

Mehdi Zarhloul, Owner and Founder of Crazy Pita Rotisserie & Grill, has been named SBA’s Small Business Person of the Year for the State of Nevada . Zarhloul will now compete with winners from all other states, the District of Columbia, Puerto Rico, Guam and the U.S. Virgin Islands for the national award. On April 29-30, we will celebrate all of our state winners and national winners at a special ceremony in the nation’s capital.

Others Nevada award winners being honored at the awards function in Las Vegas include:

The nominees were scored and selected by a panel of judges based on their responses to a variety of criteria including staying power, growth in number of employees, increase in sales, financial reports, innovative products or services, response to adversity, evidence of contributions to community-oriented projects and small business advocacy.

Mehdi Zarhloul: came to the United States from Casablanca, Morocco at age 16 with nothing but $30 in his pocket to chase the American dream and to pursue his culinary passion. He opened his first restaurant, Crazy Pita after re-locating to Las Vegas in 2006. The restaurant has since expanded to three locations with plans to franchise in the future. The “fresh casual Mediterranean” style cuisine, excellent customer service, and welcoming and clean atmosphere has increased its popularity and cemented Crazy Pita as a favorite Las Vegas eatery. Always striving to be at the fore front of innovation, their grilled to order skewers and table side service make Crazy Pita a rarity in fast food industry.

In the past twelve years, Crazy Pita has met some challenges and adversity. During the 2008 Recession, Las Vegas was hit hard, however, Crazy Pita was able to thrive and expand while other similar businesses were forced to close their doors. The restaurant industry in general has been facing many challenges mainly due to Unreliable consumer trends and decreased spending confidence. After restructuring the business in 2016, they have seen an increase in revenue by 10% and the retention of 15 employees per location. Mr. Zarhloul and Crazy Pita believe in giving back to the community and are heavily involved in supporting Las Vegas and Southern Nevada non-profit organizations. They regularly sponsor events, donate food and gift cards, services and staff time multiple of charitable organizations. Being humble, kind and giving back to the community to the restaurants’ mantra, “Cooking with Kindness”. Crazy Pita donates approximately $40,000 annually to charitable organizations. Each location sells their “Be Kind” T-shirts and bracelets as well as a special pita named Joshi’s Pita where all proceeds go directly to the Josh Stevens Foundation.

Crazy Pita is the recipient of two SBA 7(a) Loans.