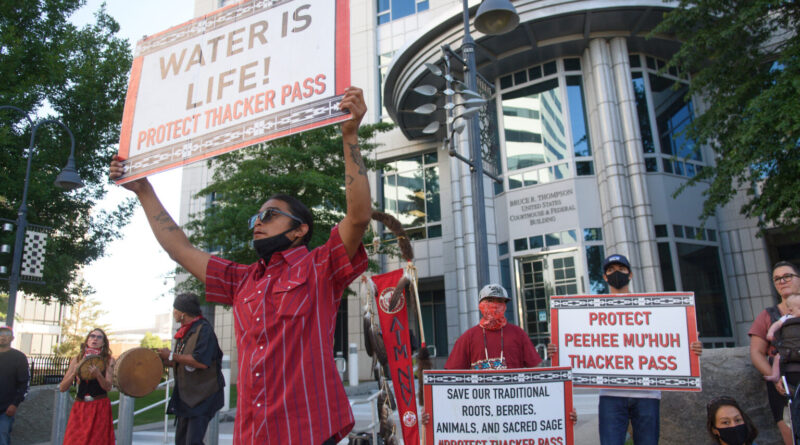 Gary McKinney, a member of the Shoshone-Paiute Tribes of the Duck Valley Indian Reservation, at the Bruce Thompson Federal Courthouse in Reno before a Thacker Pass lithium mine hearing on July 21, 2021. (David Calvert/The Nevada Independent)

Allowing digging near the proposed Thacker Pass lithium mine would cause irreparable harm to Indigenous communities in the Great Basin, attorneys for the Reno-Sparks Indian Colony, Burns Paiute Tribe and the People of Red Mountain told a federal District Court judge on Friday.

The tribal governments and members of the Fort McDermitt Paiute and Shoshone Tribe asked federal District Court Judge Miranda Du to issue a preliminary injunction. Such a ruling could halt ground disturbance as the court weighs the merits of the case. At issue is whether federal regulators improperly fast-tracked an environmental review for the closely-watched lithium mine.

In January, federal regulators with the U.S. Bureau of Land Management approved the Thacker Pass mine. The mine, including an open pit and processing facilities, is expected to span more than 5,000 acres of public land north of Winnemucca at the base of the Montana Mountains.

In a national push to secure more lithium and transition away from fossil fuels, it is one of several projects seeking a green-light from regulators. Yet the project has drawn opposition and concerns from Native American tribes in the Great Basin, environmentalists and local ranching operations adjacent to the mine site, all wary of long-term effects on their communities.

Earlier this year, four environmental groups challenged the federal government’s environmental review of the project, as did a local rancher, Edward Bartell. Their separate cases have now been consolidated into one case. Over the past month, the court also allowed the Reno-Sparks Indian Colony, the People of Red Mountain and the Burns Paiute Tribe to join as plaintiffs.

Atsa koodakuh wyh Nuwu, or the People of Red Mountain, comprise a group of tribal members from the Fort McDermitt Paiute and Shoshone Tribe who consider Thacker Pass to be sacred, as the site of a massacre, a place to perform ceremonies and an important area for hunting.

A ruling on the merits of the case is not expected for several months, and the company developing the mine, Lithium Nevada, has said in court documents that it does not plan to start construction until early 2022. The company is, however, seeking to start archaeological excavations.

Within weeks, federal land managers could issue a permit under the Archaeological Resources Protection Act to allow the company to conduct surveys of historic artifacts in the area. Those surveys are expected to involve trenching and digging in a limited area. Will Falk, an attorney for the plaintiffs, wrote in a brief that “digging these trenches and holes is likely to destroy artifacts and human remains.”

In court on Friday, he said his clients were not consulted on plans to survey historic artifacts, and they have serious concerns about how discovered artifacts would be handled and stored.

“In my clients’ view, it’s like those artifacts are being stolen from them,” Falk said.

The federal government has argued that it made a good-faith and reasonable effort to consult with nearby tribes, including the Fort McDermitt Paiute and Shoshone Tribe, the Summit Lake Paiute Tribe and the Winnemucca Indian Colony. But an attorney for the Burns Paiute Tribe in Oregon said federal land managers erred by not consulting with other tribes connected to the land.

The attorney, Rick Eichstaedt, said consultation is “an affirmative duty” for the agency.

Arwyn Carroll, a lawyer for the federal government, said federal land managers followed the required process, relying on regional land planning documents and past communications about what projects should trigger a formal government-to-government consultation. Carroll added that the tribal governments, including the plaintiffs, are now being consulted on the archeological permit.

“Consultation is still ongoing,” she said.

Du said she planned to issue a written ruling on the request for an injunction. Last month, Du declined to enjoin the activities based on different arguments from the environmental groups.

Falk, the attorney for the Reno-Sparks Indian Colony and the People of Red Mountain, has also helped organize an encampment at the mine site. Protesters at the encampment have said that they are prepared to take direct action to prevent any ground disturbance at the project site.

Lithium Nevada’s attorney, Laura Granier, told the court that the disturbance contemplated in the planned archeological surveys is small compared to the land disturbance that has already taken place in the area, including drill holes, the construction of a well and a transmission line.

Granier said that any work, moving forward, would still be regulated under federal statutes, including the National American Graves Protection and Repatriation Act. “If there is an unanticipated discovery or the discovery of human remains,” Granier told the court, “all work halts.”