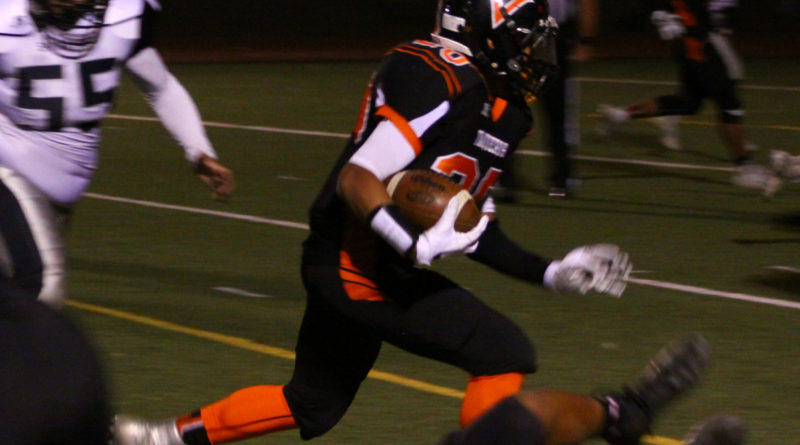 Trailing by just one score with the half winding down and about to take possession of the ball, the players and coaches on the Fernley sideline were feeling pretty good about the position they found themselves in.

Two big plays later, and the Vaqueros were instead in the familiar position of looking to bounce back from adversity.

Spring Creek converted a muffed kickoff into a touchdown just before halftime, then hit on a 59-yard bomb on the first play of the third quarter, and what had been a close game quickly turned to a rout, as the Spartans stayed unbeaten and gave Fernley its fourth loss, 53-12.

“We thought we were hanging in with them and were feeling pretty good about things,” Fernley coach Chris Ward said. “That was our halftime speech too, just saying, ‘You know what, let’s chip away at this lead, let’s get them in the fourth quarter and let’s get a chance to win this thing in the fourth quarter.’ It didn’t work out quite that way.”

The Spartans had just taken a 20-12 lead tie with a 1-yard touchdown on a quarterback sneak by Jon Jund, with 3:06 left in the second quarter.

The Spartans, who had squibbed the first three kickoffs of the game, rather than kick it deep to the Fernley returners, did the same thing again, but a Fernley blocker mishandled the bouncing ball and the Spartans recovered at the Fernley 31-yard line. But, just when Fernley looked like it might be in a good position, lightning struck again. After getting a first down at the Fernley 20, a holding penalty and an incomplete pass had the Spartans facing second-and-25 at the Fernley 25. But Jund hit Sheldon Wilkinson for a 30-yard completion, then found Dakota Larson in the back corner of the end zone for a 5-yard touchdown and a 26-12 halftime lead.

Jund and Larson then connected on a 58-yard pass on the first play of the third quarter, after Fernley tried a squib kick of its own to start the second half, and suddenly it was 32-12.

“I think that was big because Fernley, I thought they played really well the first half and they were giving us problems,” Spring Creek coach Joel Jund said.

Larson beat the Vaqueros deep several times, the first time on a 42-yard touchdown catch from Jund with 6:07 left in the first quarter. Larson batted the ball up in the air, but was able to haul it in as he tangled with a Fernley defender and fell into the end zone.

The Vaqueros answered quickly, tying the game at 6-6 on a 1-yard run by Zach Burns to cap an 8-play, 68-yard drive.

The Spartans, who scored on all eight of their possessions in the game, took a 14-6 lead on the first play of the second quarter, a 39-yard run by Jason Painter, followed by a two-point conversion run by Painter.

The Vaqueros went 50 yards in 10 plays to cut the lead to 14-12 on a 9-yard touchdown run by Jordan Presley. The Vaqueros ripped off several big plays on both scoring drives.

“They lined up in a front that we were able to take advantage of,” Ward said. “They jumped out of it and jumped into a different front, we were able to move the ball on that, but after they started building that lead they could get a little reckless, just start teeing off, not playing so conservative.”

Jund completed 27 of 32 passes for 380 yards and four touchdowns. Larson caught 13 of those passes, for 228 yards and 3 touchdowns. Painter carried the ball 12 times for 77 yards and two touchdowns, and also caught six passes for 35 yards, many of them shovel passes on fly sweeps that were in effect running plays.

In all, the Spartans outgained the Vaqueros 540 yards to 215.

“They were well executed,” Ward said. “They threw well, they ran the ball well. They’re a good team.”

The loss drops the Vaqueros to 2-4, but they can clinch a playoff spot if they can win two of their final three games.

The Vaqueros play at Wooster next Friday. Spring Creek (6-0)  has a showdown with Truckee, with is 5-0 and hosts Sparks on Saturday.

“We’ll watch some film tomorrow, regroup, and get after Wooster,” Ward said.

“Our kids played their best game,” coach Gary Stone said. “Spring Creek was a good team. Everything went our way. Could not be prouder. Coach Wilson called his best game as well.”