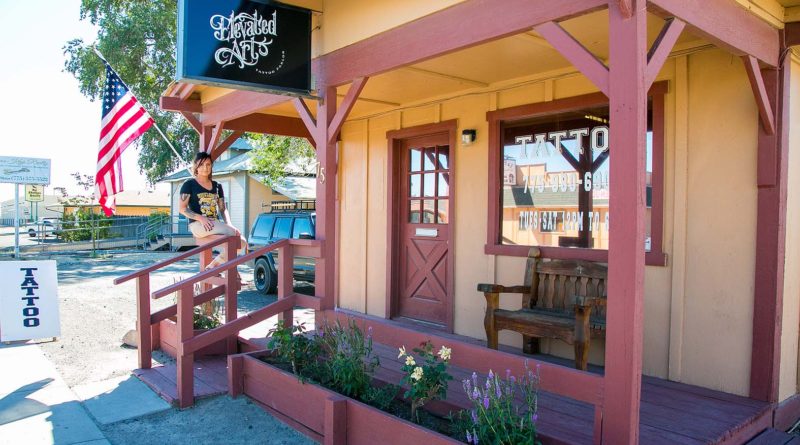 Felicity Zoberski has not had an easy life. She grew up in Fernley, but during her second year of high school, she had to move to Reno due to family problems. As a teenager in Reno, Zoberski supported herself and her sister while completing an on-line high school degree and working full-time at a telemarketing company.

When asked how she got into tattooing Zoberski says, “I just decided I wanted to do something I love doing. I didn’t want my kids to see how miserable I was working a job I did not like. I was good at art but did not want to be a starving artist, so I chose tattooing. I also had an ex-boyfriend who told me I could not do it and I would never succeed, so I just did it.”

At the time Zoberski decided she wanted to go into tattooing, she didn’t even have a tattoo, but that did not stop her. After going to seven different Reno tattoo shops asking for an apprenticeship, she finally convinced one shop owner to give her a chance.

“I got the apprenticeship, because the owner asked me, ‘When can you start?'” Zoberski sayd. “I said, ‘Right now!’ The owner later told me, ‘If you had not said that, you would not have gotten the job.’”

Because the apprenticeship was unpaid, she had to get public assistance for rent and food. She also pawned her DVDs and other belongings to get gas money. The regular tattoo apprenticeship takes about two years, but Zoberski finished her training in less than a year. After completing her apprenticeship, the owner made her a manager of his other shop. Zoberski has now been tattooing for almost five years.

She recently opened her own shop at 75 East Main St.

“I did not want to open my Fernley tattoo parlor in a strip mall with a liquor store next door. I did not want to be a tattoo shop with flashing neon signs and Sailor Jerry posters, so when I saw the building on Main Street, I knew I found my new home,” Zoberski said. “The building was built in the 1940’s and has a lot of character.”

“I want to be part of the community by contributing to Fernley’s arts program, especially by reviving the Fernley Arts Commission, Zoberski said. “People want the arts in their community. Art is important for Fernley’s future. Look at midtown Reno. It’s Artown now. Art brings in business to the city. If we had something like that in Fernley, I think it would be really valuable. I also plan on doing several community charity events like the Christmas toy donation Tats for Tots, a winter clothes drive, and I want to help the Veteran’s Coalition.”

Zoberski lives in Fernley with her 5-year-old, 4-year-old and 5-month-old daughters, who are kept busy with school, soccer, horseback riding and other activities.

2 thoughts on “People You Should Know – Felicity Zoberski”