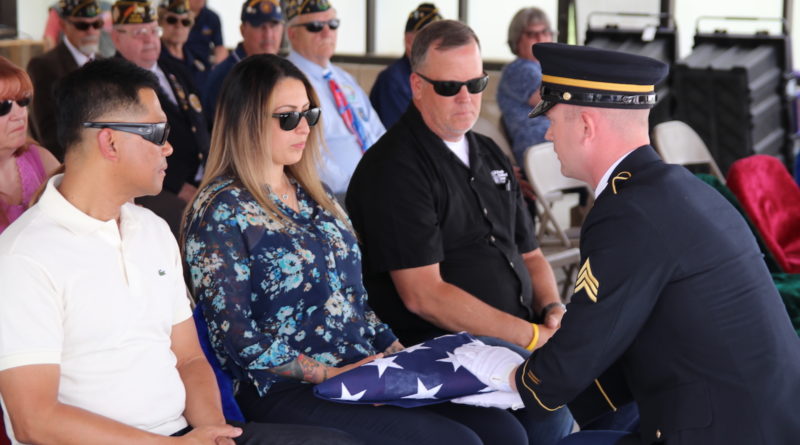 Fifteen veterans whose remains have gone unclaimed — some for decades – will be remembered on July 12 in a military service at the Northern Nevada Veterans Memorial Cemetery in Fernley.

The service begins at 2 p.m. and will include a parade of U.S. flags by the Patriot Guard Riders, a eulogy, a 3-volley salute, guest speakers and the playing of “Taps” before the remains are interred.

The Nevada Veterans Coalition conducts the service as part of the Missing in Nevada Project, a program that has, over time, identified long lost servicemen and women dating back to their service in World War I and allows for the release of the remains from a mortuary to the NVC. A procession leaving Sparks at 12:30 p.m. will bring the remains to the Fernley cemetery via Main Street.

Brett Palmer, president of the NVC, said during past processions, residents of the surrounding area have lined Fernley’s Main Street and waved U.S. flags and signs to honor the veterans. He would like to see the streets lined for the July 12 event. In addition to the procession, Palmer said two World War II veterans will receive the flag at the end of the ceremony. Ed Hall, 95, is the last Pearl Harbor survivor in Nevada. He was 18 years old when Japanese aircraft bombed Pearl Harbor on Dec. 7, 1941. Jack Hill, another 95-year old, was stationed in Europe as a bomber pilot who flew night missions into Germany.

According to the NVC, the Missing in Nevada Project depends on many individuals and organizations such as National Personnel Records Center and their vast team of researchers, the NVC members’ countless volunteer hours, the NVC Honor Guard and various other escorts and the staff at NNVMC for offering guidance through the proper procedures to give the veterans the proper military service they deserve.

Palmer said the NVC is also responsible for the Missing in Nevada Project for the Southern Nevada Veterans Memorial Cemetery in Boulder City and works closely with Bunkers Mortuary in Las Vegas.

The soldiers from the two world wars include:

As a prelude to Missing in Nevada, the NVC conducted its monthly unaccompanied ceremony on Thursday and honored eight veterans. The military service recognizes the veterans, but their families have arranged for burial before the ceremony.

In her comments, Sharon Serenko of the NVC thanked the men for their service to the nation and said their final closure to life was well deserved. She said the NVC was honored to celebrate their lives as several dozen people attended the half-hour ceremony.

“We are honored to be substitutes for those who celebrated and observed their lives,” she added.