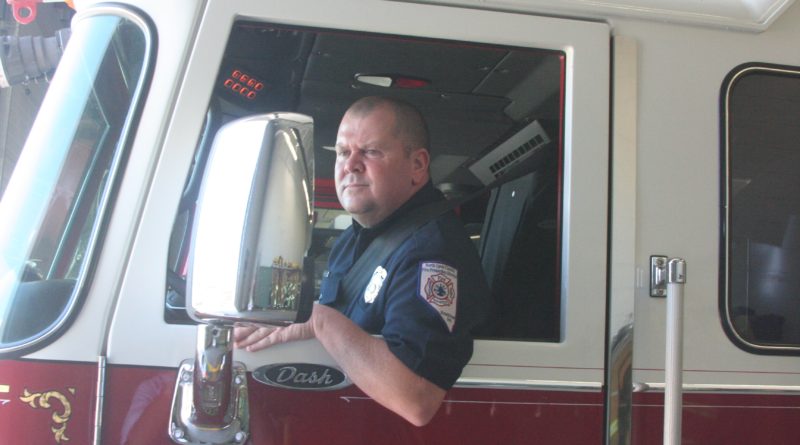 A little less than two weeks remain to recognize Fernley’s Steve Emery as one of the top volunteer firefighters in the United States.

Emery is one of 25 firefighters nominated for “Step Up and Stand Out,” a national campaign to increase awareness of the need for volunteer firefighters.

Residents can vote for the firefighter of their choice, and the top five who receive the most votes will receive 200 10-year smoke detectors for their department to give away. The top five also earn a trip to the Academy of Country Music Awards.

To see Emery’s nomination video, along with the other finalists’ videos, and to vote, go to www.firehouse.com/vf and go to “Click, It’s time to vote.” Voting ends July 31, to determine the five finalists who will go on for the Grand Prize. Emery ranked ninth in the contest as of Monday evening.

The program is a collaboration between Kidde Fire Safety, Firehouse, Country Music star Craig Morgan and several fire service organizations. An integral element of the program is a contest that launched nationwide February 11, to recognize volunteers who have gone above and beyond in their community.

“When I saw ‘Step up and Stand Out,’ he fits,” Huntley said. “I encourage everybody, let’s reward a volunteer. If all of the residents of Fernley step up, we’d have that thing lit.”

Emery has served as a volunteer with North Lyon Fire for three years, and already has been voted the department’s Volunteer of the Year twice. He ranks in the top five in the department for total fire responses over his three years of service, counting both paid and volunteer firefighters.

Emery started his career as a volunteer firefighter in 1986 in Vallejo, Calif. through an Explorers program, then he joined the American Canyon Fire Protection District as a volunteer until about moving to Fernley about 11 years ago.

A single father, Emery said he moved to Fernley because his kids were ready to start school and he didn’t want them growing up in the Bay Area environment, and his parents were already living here,

Emery’s oldest son, Stephen 18, graduated from Fernley High School and June and went into the U.S. Air Force, where he is in basic training at Lackland Air Force Base in San Antonio, Tex.

“I’m proud, but scared at the same time,” Emery said.

His son Nathan, 13, will be a freshman at FHS this fall, and his son Donovan, 12, will be in seventh grade at Silverland Middle School.

Emery works Thursdays, Fridays and Saturdays as an Emergency Trauma Technician at Renown Regional Medical Center in Reno and responds to calls as a volunteer the rest of the week.

After being out of fire service for several years, Emery decided to get back in as a volunteer with North Lyon Fire three years ago,

“The kids were older and I could just dedicate more time to doing something like that,” he said.

Huntley said Emery embodies everything the department is looking for in a volunteer.

“We are blessed to have Steve,” Huntley said. “We need volunteers and we need more Steves running around. He sets an example by the type person he is. He enjoys the adrenaline factor of fighting a fire, but he enjoys the helping people factor, too.”

When he responds to a fire, Emery wears a camera on his helmet that records the scene.

“I like to go back through the scenario and critique it,” he said.

Emery said one of his favorite memories was rescuing a cat from a fire in a duplex.

“But I brought the cat out, it got fresh air and ran back in,” he said.

Emery was also one of the responders to the scene on Jessica Lane in which Jeremiah Bean killed Bob and Dorothy Pape and set fire to their home as part of a spree in which he killed five people.

Emery is also certified ads an EMT Intermediate and is often mans the district’s third ambulance.

Often, that means rushing out to a call in the middle of dinner or a movie.

Emery contracted rheumatic fever at age 2 and has had two open heart surgeries, first at age 12 and again at 24, and suffers from asthma. However, he said he has no trouble breathing when fighting fires, because of the Self Contained Breathing Apparatus.

He said he’s never considered not being a firefighter, in spite of the medical issues he’s dealt with.

“I do it because I have the skills to do so,” he said.

Huntley said Emery’s humble nature is part of the reason he’s so beloved by everyone involved with the fire district.

“I would like to see somebody well deserving get rewarded,” Huntley said. “For a guy like Steve Emery, it should be coming back to him in waves.”