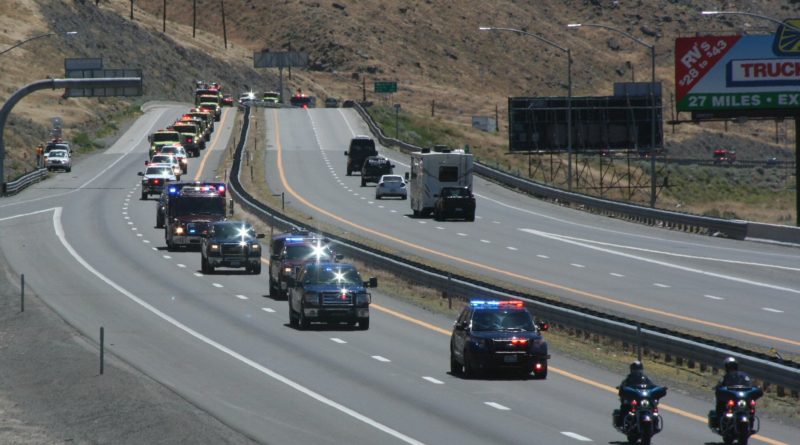 The North Lyon County Fire Department joined a procession Monday morning to escort the two BLM firefighters who were killed in a single vehicle crash Sunday north of Winnemucca.

Firefighters and emergency responders from agencies across Northern Nevada joined in the procession to escort the two deceased firefighters from Winnemucca to the Washoe County Medical Examiner’s Office in Reno.

The procession then went past Renown Regional Medical Center, to pay tribute to a third firefighter who is hospitalized there with injuries suffered in the crash.

The Nevada Highway Patrol reports that its investigation indicates the firefighters were traveling south on State Route 140 in a BLM vehicle when it overturned due to tire failure. The firefighters were returning to Winnemucca from the Denio area near the Oregon state line. The one injured BLM firefighter was flow to Renown for treatment.

“North Lyon Fire was honored to be able to take part,” district chief Scott Huntley said. “Our hearts and minds are with the BLM family and the families who lost their loved ones.”

Truck 61 and two ambulances parked on the Exit 50 overpass east of Fernley to salute the procession, while a command vehicle and fire engine joined the procession from there to Reno.

“We picked them up on I-80 as they hit our district to welcome them to our district and pay homage to their firefighters and support our brothers and sisters at BLM,” Huntley said. “We feel especially close to BLM because we house a BLM crew in our district.”

BLM fire crews respond to wildfires throughout the west.

“The residents of Fernley and North Lyon County honor wildland firefighters by making sure our community is wildfire ready and doing what we can to prevent wildfires,” Huntley said.