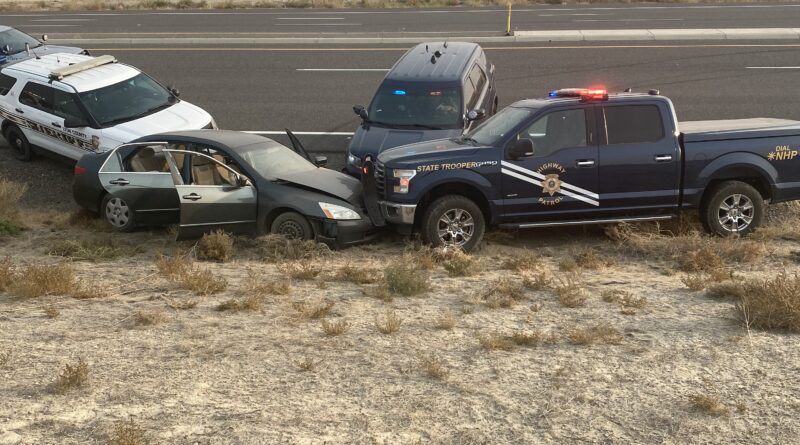 The driver who was arrested Tuesday following a pursuit that ended in Fernley tried to run over three Nevada Department of Transportation workers during the chase, the Nevada Highway Patrol said Wednesday.

NHP joined the pursuit of the vehicle in the area of I-80 eastbound near E. McCarran Blvd. in Sparks at approximately 7:06 a.m., assisting the Reno Police Department in pursuit of a suspect, driving a green 2005 Honda sedan, who was reported to have been involved in an assault with a deadly weapon. The driver was reported to be driving at speeds up to 110 miles per hour.

Near Washoe County Mile Marker 44, just east of Wadsworth Exit 43, Lyon County Sheriff’s deputies had stop sticks in place in an attempt to stop the vehicle. The vehicle avoided the stop sticks, crossing the unpaved center median and went the wrong way, eastbound in the westbound lanes, toward Fernley.

The vehicle exited the freeway at the westbound onramp on Exit 46, still going the wrong way, and stopped. The driver left the vehicle and approached another vehicle in an apparent attempt to carjack the vehicle. When an NHP Trooper crossed the unpaved median toward the driver of the Honda, he returned the Honda and headed south on SR-427, Main St., in Fernley at a high rate of speed. The driver avoided an attempt by an NHP Trooper to perform a precision immobilization technique (PIT).

NHP says the vehicle went the wrong way on Main St., southbound in the northbound lane, and steered to strike three NDOT workers on the shoulder. The NDOT workers ran for cover of their dump truck and avoided being hit.

NDOT charges that the vehicle then traveled east on Farm District Road, SR 828, at a high rate of speed and passed other vehicles unsafely. The vehicle then approached US-50A and travelled west. The vehicle crossed the raised concrete median and went wrong way again, westbound in the eastbound lanes.

The three people in the car were removed from the vehicle and detained without injury. The occupants were checked out by medical personnel and medically cleared. No members of law enforcement were injured in the incident.

Upon further investigation, the vehicle was determined to be stolen.