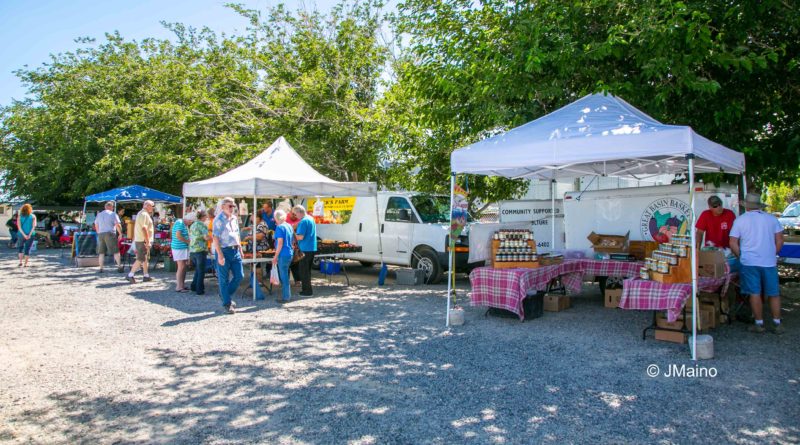 Fernley’s Farmers Market is open and ready for business.

Linda Marrone manages the 3rd & Curry Street Farmers Market in downtown Carson City and has done so for nine years, and now she runs the Fernley Farmers market too. This is the Fernley Farmer Market’s fourth year and its fourth location, in the parking lot of the Fernley First Baptist Church.

“The market has received great support from the Big R right next door and the church, and without their support the farmers market would not have survived,” Marrone said. “We also received lots of help from the City of Fernley and a grant to help with our advertising.”

Most vendors, such as Tim Coverston of First Fruits Sustainable Farms from Fallon, come from Northern Nevada. Coverston purchased his bees last year and this is the farm’s first year to produce honey. Additionally, First Fruits Sustainable Farms offers vegetables (including heirloom tomatoes), eggs and other products.One of the farm’s unique feature is that it practices sustainable farming where crops and other products are grown without relying on synthetic fertilizers and uses techniques such as crop rotation and conservation tillage to protect the environment.

Yeng Bue of Chuck’s Farm has been in the business for 20 years. Although Chuck’s Farms is in Marysville Calif., Bue only sells at local farmers markets in northern Nevada and said she has put more than 300,000 miles on her van.

If you are into jerky, then Jeremiah Eiler of Happy Treats is the man to see. Eiler lives in Fernley and sells several different versions of Jerky Junction jerky. Options range from Buffalo to Peppered Ahi and everything in between. In addition to jerky, Happy Treats features various pickled products and even something for the family dog from Diggin’ Your Dog.

Ron Peterson represents Lattin Farms of Fallon. A chef by training, Peterson does everything from baking to repairing whatever needs to be fixed on the farm and even has his own produce stand in Fallon called “Pick’n and Grin’n.”

Rick and B. Ann Lattin, who have been in the business since 1977, own Lattin farms. The farm is certified organic and grows melons, squash, corn, raspberries, garlic, peppers and more.