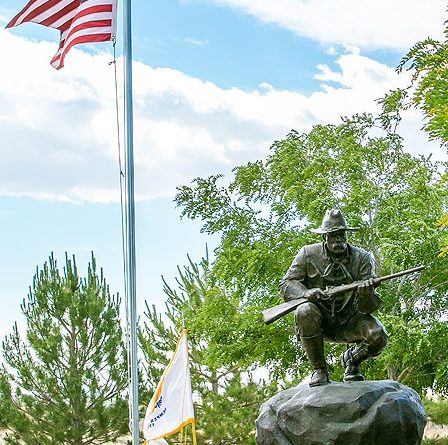 The ceremony was held to dedicate the Trooper monument dedicated to the Civil War Union Army’s 1st Battalion Volunteer Calvary or the Nevada Territory Cavalry Volunteers. This was a unit raised for the Union army during the Civil War.

Artist Scott Rogers created The Trooper bronze monument. His web page notes the “piece represents a United States military cavalry trooper during the 1880’s…” who were “Famed for their fierceness in battle…”.

The ceremony held special meaning for area resident Robert Sedgwick. His relative, Major General John Sedgwick distinguished himself during the Civil War and Fort Sedgwick in Colorado was named after the General in 1865.

All photos by Joseph Maino, The Fernley Reporter