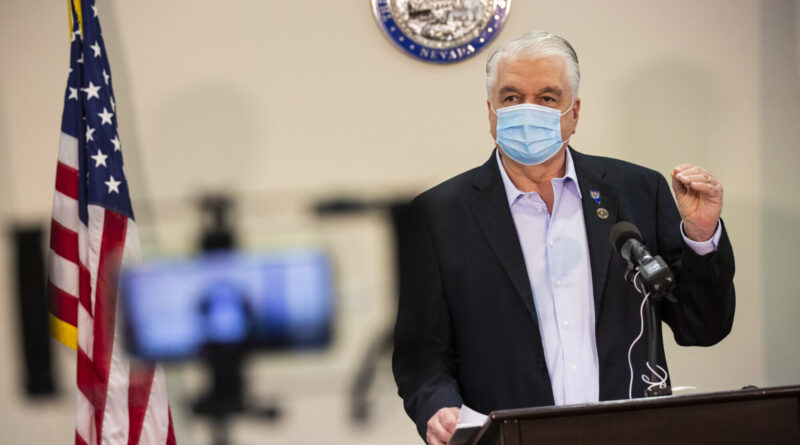 Nevada is moving to a new COVID-19 vaccination strategy that will allow the state to distribute doses to essential workers and priority segments of the population in tandem.

Under the new, highly anticipated plan, which state vaccination officials detailed at a press conference with Gov. Steve Sisolak on Monday, the state will shift from its previous system of vaccination “tiers” to a new dual “lane” strategy, which will allow workforce vaccination to occur at the same time as mass vaccination of the general population. Each of those lanes, however, will still be divided into priority groups — with public safety workers at the top of the workforce sector and elderly Nevadans at the top of the general population group.

The new, bifurcated approach will allow the state to vaccinate more people at once, for instance, allowing counties to vaccinate K-12 employees while also administering doses to elderly individuals, where the previous system had required officials to vaccinate the vast majority of one group before proceeding to the next.

“Instead of ignoring or denying the challenges we face, we will be committed to identifying them and finding solutions,” Sisolak said. “We will course-correct as necessary and remove any obstacles to get more shots in the arms of Nevadans.”

The announcement of the new vaccine structure comes as the state has come under fire for having one of the worst COVID vaccine rates per capita of any state, though state leaders say publicly reported vaccine totals typically lag behind reported totals because of the logistical burden of entering each dose into a state vaccine tracking system. As of Sunday, Nevada had administered 61,644 doses, including more than 8,700 second doses, of the COVID-19 vaccine out of 170,400 doses received.

Sisolak said during the press conference that he’s “never satisfied” with how quickly vaccines are administered, but said the state needed more flexibility from the federal government and more predictability as to how much vaccine the state receives on a weekly basis.

“Nevada simply does not have the dollars and monetary resources in order to set up plans like some of the other states do, but I think if you look at the total percentage of vaccines that we’ve given out as relates to other states, I’m not satisfied, but I’m proud of everything that our frontline workers have done,” he said.

The lane structure will kick in after individual counties finish vaccinating those in the initial first “tier” of vaccination priority, which includes the bulk of the state’s health care workforce. The two lanes will be vaccinated concurrently, with individual counties moving through the prioritization at different rates based on vaccine availability and population size.

State immunization officials said that among the general population group, the state is prioritizing those aged 70 and older. Previously, it had said it only planned to prioritize those 75 and older. After that, the state will prioritize vaccines for:

The state will allocate vaccines to the approximately 10,200 inmates in the state correctional system under that same priority list — meaning inmates over the age of 70 behind bars will receive a vaccine before an otherwise healthy individual under the age of 65 will. Under the previous version of the state’s vaccine playbook, all inmates were slated to be vaccinated at the end of what was known as “Tier 2” but before elderly Nevadans and those with pre-existing conditions, which some found controversial.

At the same time, the state will vaccinate Nevadans who are considered frontline or essential workforce, starting with public safety and security workers, including staff with the Department of Corrections, law enforcement, public safety, national security and state and local emergency operations managers and staff.

After that, the following groups will be vaccinated:

State health officials cautioned that employment within one of those categories doesn’t automatically make a person eligible for a vaccine, saying that it would be up to individual employers and businesses to evaluate priority vaccination eligibility. Individuals who can work remotely or socially distance on the job are not recommended to receive the vaccine, even if their work group is prioritized.

Sisolak also announced at the press conference that he has convened a group, including the Division of Emergency Management, the Nevada National Guard and the state immunization team, to review logistical challenges with distributing the vaccine. He said the group is currently working with local officials to stand up vaccination centers “for our state’s most populous locations.”

Clark County health officials last week acknowledged they weren’t as far along in vaccinating their priority population as Washoe County and rural portions of the state, though they blamed the slower vaccination effort on the large population size. While the county has done well distributing doses to workers at local hospitals, it has struggled to reach all of the smaller health care settings, such as private doctor’s offices.

“This team I convened continues to look at and make breakthroughs in these challenges daily, and we will be sharing more information on  these fronts as it becomes available,” Sisolak said.

But he also blamed some of the challenges of vaccine distribution on the federal government, which so far has only provided the state its total allocation amount one week ahead. Sisolak said that has put states and local jurisdictions “in an impossible position to predict exactly when prioritization  groups will be able to get vaccinated.”

Sisolak said he is hopeful that President-elect Joe Biden’s administration, which takes over on Jan. 20, will move to quickly implement a unified national vaccine distribution strategy to assist states.

Shannon Bennett, the state’s immunization program manager, said during the press conference that vaccine data entry “thus far has been a challenge” — stating that each administered dose requires about two minutes of time to enter into the state data system. She said the 12,000 doses added to the state’s system over the last three days was the equivalent of about 400 hours of data entry work.

Under the 30-day extension of Nevada’s “statewide pause” announced Monday, businesses including restaurants, bars, gyms and casinos will remain limited to 25 percent occupancy, with indoor dining establishments required to take reservations and seat no more than four at a table together.

Other retail establishments, like indoor malls and grocery stores, are still allowed to operate at 50 percent capacity, though big-box stores have been required to station an employee at entrances to count customers.

Public gatherings remain limited to 50 people or 25 percent of capacity, with private gatherings limited to 10 people from a maximum of two households. Nevadans are still required to wear masks at all times when around someone from outside their household, whether indoors or outdoors and whether in public or private.

Sisolak, however, noted that “there is always the ability to adjust” the health and safety restrictions should the situation change.

He said that the Department of Health and Human Services predicts Nevada won’t see the full impact of holiday gatherings in December on COVID-19 case numbers until the end of the month. It will take even longer for any surge to show up in the numbers of COVID-19 hospitalizations and deaths, he said.

“The reality is, what the trends now show right is that the state — including Washoe and Clark– are still experiencing very high levels of disease burden, even if cases decline or plateau are starting between holiday surges,” Sisolak said. “Community spread is high, and many of our hospitals are strained.”

Sisolak also took some time at the beginning of his remarks to chastise President Donald Trump and his administration in light of the insurrection at the U.S. Capitol last week. However, he said that the “chaos and collapse did not just happen last week” but “has been developing steadily in the last four years.”

“The divisiveness and lack of leadership has resulted in the lack of a unified national strategy to combat a deadly pandemic,” Sisolak said. “It has pitted state against state on the open market trying to secure personal.”

Read Nevada’s updated vaccination playbook and a summary of it below: