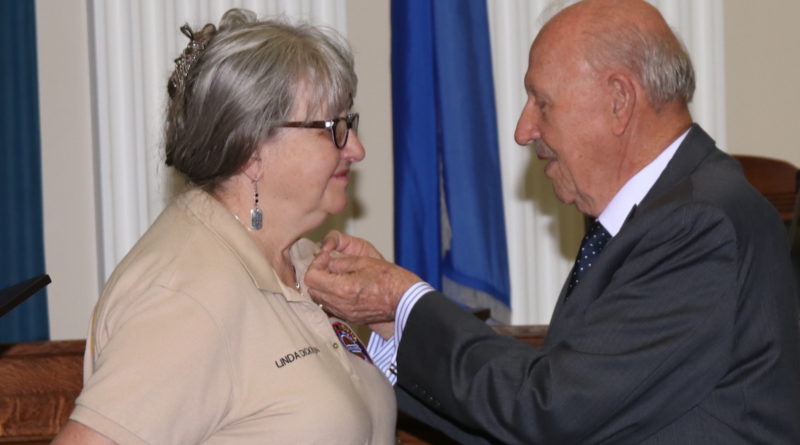 Dickinson served in the U.S. Air Force Nurse Corps during the Vietnam War era, and most recently, she presided over Sierra Nevada chapter 989 of the Vietnam Veterans of America as commander for four years. The Nevada Department of Veterans Services named Dickinson as its September Veteran of the Month.

Gov. Steve Sisolak spoke highly of Dickinson and of the work veterans do during the ceremony at the Old Assembly Chamber on the second floor of the historic capitol building.

“This is something I look forward to every month,” Sisolak said. “The Veteran of the Month award is given to a Nevada veteran who has gone and above the call of duty for his or her fellow veterans and volunteer work.”

Sisolak said veterans are an important part of their communities in the way they give, and volunteer work give them a renewed sense of purpose. The first-term governor said that is something he wants to encourage with everyone. He said Dickinson epitomizes that duty of service.

“She continues to support various local veterans organizations,” Sisolak pointed out. “Linda has had a strong presence at the he m of VVA 989 which contributes to the community in a number of ways.”

During the presentation, he cited VVA 989’s community partnership with the NDVS and supporting the December opening of the new Northern Nevada State Veterans Home in Sparks. He said Dickinson has served on a number of advisory boards and has attended state conferences of post-traumatic stress disorder and suicide prevention. During her tenure as president, Sisolak said VVA 989 had a successful Vietnam War Veterans Remembrance Day at the end of March, helped fun Adopt a Vet dental program,  presented scholarships and organized programs in the schools.

NDVS Director Kat Miller said the monthly award recognizes men and women who give back to their communities and help fellow their veterans, and she considers Dickinson to be invaluable.

“She’s one of my favorite people,” Miller said. “I am so happy to see this today.”

“Every time I see Linda she’s serving food some place,” Miller said, adding the event could be a fundraiser or Christmas dinner for a homeless person whose van broke down.

Dickinson said she volunteers because she enjoys doing it, and she feel satisfaction in knowing she makes a difference. “I am very seldom speechless,” she said.” I am truly humbled and honored with this dedication and this award.”