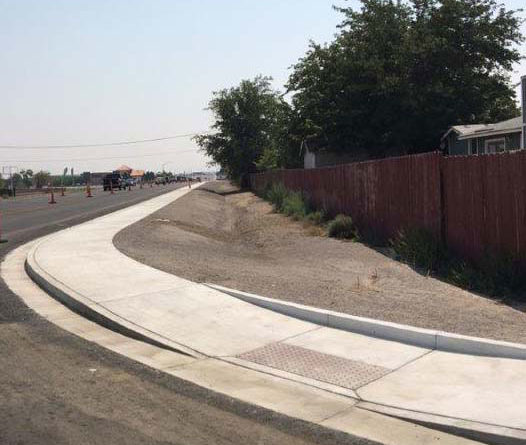 Over the coming week, the Nevada Department of Transportation will substantially complete a project to install sidewalk on Main Street in downtown Fernley.

As construction completes over the next week, drivers will see the previously-closed lane reopen, with intermittent lane and shoulder closures for finishing work.

The project, which began on June 18, constructed just under one mile of sidewalk on the southern side of Main Street between Hardie Lane and 7th Street, as well as enhanced roadway curbing and sidewalk ramps. The roadway was also restriped to accommodate a bicycle lane.

Ultimately, the approximately $736,000 project by contractor Granite Construction Company added sidewalk in areas where there was none to create a continuous walkway between the U.S. 95A junction in downtown Fernley and the Fernley roundabout. The improvements are part of the up to $5 million in state highway funds NDOT dedicates every year to Americans with Disabilities Act-related improvements to make state roadways more accessible for all. State highway information is available at nevadadot.com or by calling (775) 888-7000.