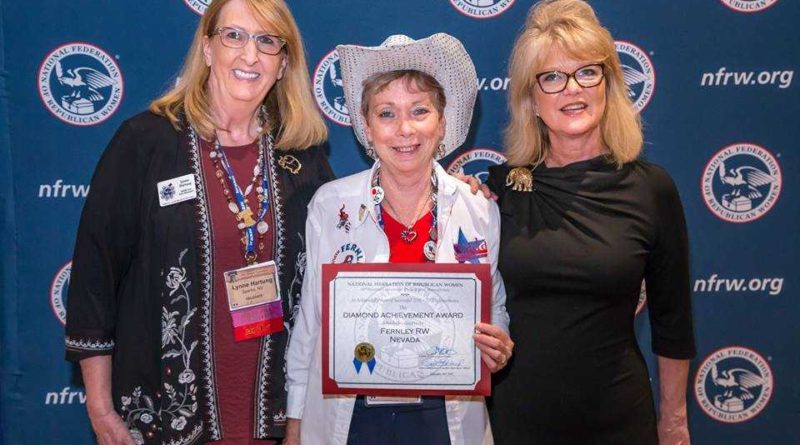 The Fernley Republican Women won the national Diamond Award for Achievement during the National Federation of Republican Women (NFRW) 39th Biennial Convention held Sept. 14-17 in Philadelphia. More than 425 awards were given out to clubs which demonstrated excellence in membership development, campaign activities, community relations, programs and club functions over the past two years.

“On behalf of the Fernley Republican Women and our current President, Carol Franich, I was proud to accept the Diamond Award for Achievement at the NFRW Biennial Convention in Philadelphia,” said Anita Trone, Immediate Past President. “We are a small, but mighty club. We worked very hard to achieve this prestigious award. As the Achievement Awards Chair for the Nevada Federation of Republican Women (NvFRW), I am delighted to report that the NvFRW won one of the seven Betty Heitman Awards for state excellence in achievement. Of the seventeen clubs in Nevada, NvFRW clubs were awarded seven Diamond and four Gold Awards.”

“An outstanding number of clubs from across the country responded with entries in our biennial achievement awards program,” Ecklund said. “It’s great to recognize these clubs for their achievements, but it’s even more exciting to see the results of their focused programming and outreach in their communities that increase the effectiveness of women in the cause of good government. Reading the award applications confirms the impact NFRW members have in promoting the principles of freedom, equality and justice upon which our government is founded.”

Founded in 1938, the National Federation of Republican Women is the largest and most influential Republican women’s group in the nation, proudly representing the party that first made it possible for women to vote in the U.S. The NFRW works to increase the effectiveness and relevance of women in the cause of good government. Our mission remains to recruit and elect Republican candidates, promote the principles of the Republican Party, educate the public, and inform the media.