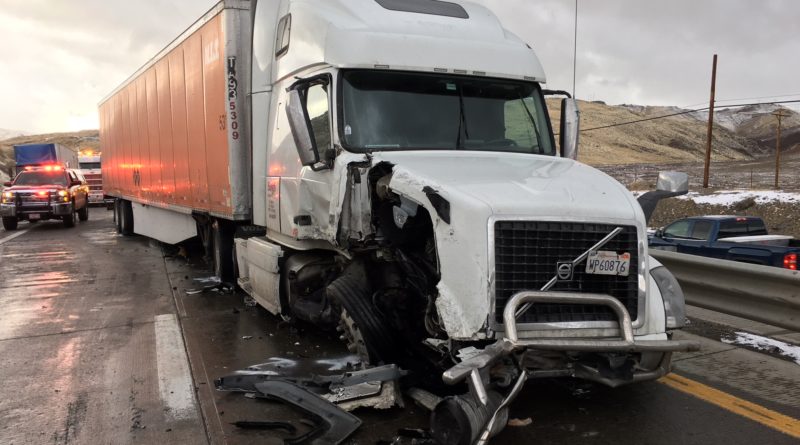 During the afternoon hours on Thursday, Feb. 22, Nevada Highway Patrol Troopers handled a large number of crashes in the Reno area.

At approximately 2 p.m., Troopers responded to Interstate 80 eastbound near mile marker 25, approximately 4 miles east of Sparks. The crash was initially reported to involve four vehicles and a tractor/trailer. Upon arrival, Troopers determined that there were 19 vehicles involved, including several tractor/trailers, blocking both eastbound travel lanes. Preliminary investigation shows that eight people involved in the crashes were transported to area hospitals. Nevada Department of Transportation responded to the area and routed traffic to the off ramps at the Lockwood and Mustang exits to westbound Interstate 80. Eastbound Interstate 80 was closed from 2 p.m. until approximately 5:45 p.m.

At approximately 4 p.m., Troopers responded to reports of multiple vehicles involved in crashes on Interstate 580 northbound at mile marker 11 Washoe, at the Galena Creek Bridge. The chain reaction crash began when a sedan lost control on the snow and ice covered roadway. Preliminary investigation shows that 34 vehicles were involved in the crash including two Nevada Highway Patrol vehicles. The crash blocked all northbound lanes of Interstate 580 from approximately 4 p.m. and was reopened at approximately 7:30 p.m. Northbound traffic was routed to US-395 ALT during that time. Troopers handled 17 crashes at the scene. Per REMSA, four people involved were transported to area hospitals.

The Nevada Highway Patrol would like to thank all of the first responders who provided assistance during this busy afternoon. With the assistance of local Law Enforcement, Fire, EMS, NDOT and countless tow companies, these crashes were able to be cleared in an expeditious manner.

NHP would like to remind motorists to reduce their speeds, increase following distances and drive with extreme caution during inclement weather.