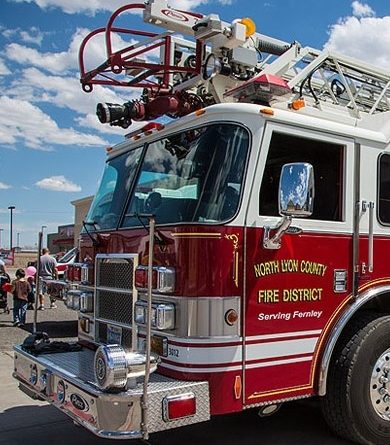 A fire that appears to have started in the kitchen destroyed a home on Mountain Rose Drive Monday afternoon.

North Lyon County Fire Protection District firefighter John Criscione said the fire department was dispatched to a report of a residential structure fire at 1344 Mountain Rose Drive at 12:34 p.m. Monday. The first firefighters arrived within five minutes and found a two-story home with heavy smoke and fire pouring from two sides of the house.

“Our crews established a water source and made an aggressive offensive attack and called for mutual aid from Storey County and Central Lyon County,” Criscione said.

Fire flowing out of the house threatened homes on either side, but firefighters were able to keep the fire from spreading to the nearby houses.

“It seems the origin of the fire was in the kitchen and it kind of made its way up the air conditioning chase,” Criscione said.

Criscione said the residents were not home when the fire started, but showed up while firefighters were battling the blaze. No injuries were reported.

Crews had the fire extinguished and overhauled the scene by 3:15 p.m., Criscione said, and the American Red Cross was called in to provide help for the family.

The cause of the fire is under investigation, Criscione said.

“It looked pretty clear cut, but because nobody was home and it spread so quickly so it’s pretty standard for an investigation to be done afterward,” he said.