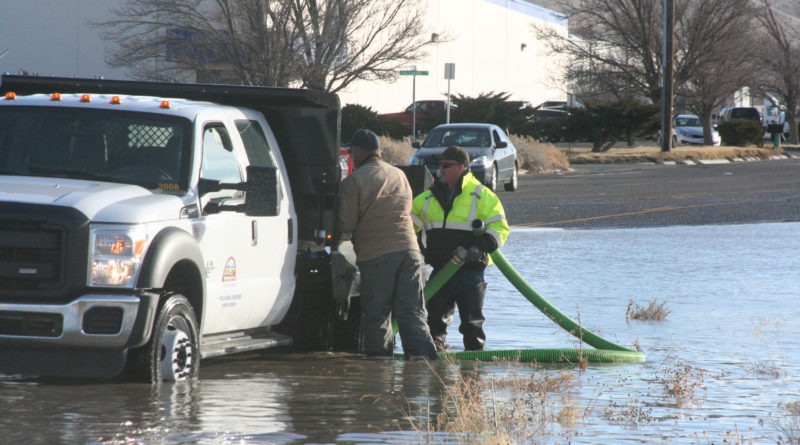 When forecasters began to predict heavy rain would follow the more than 8 inches of snow that fell in Fernley last Wednesday, City of Fernley officials began to collaborate with Lyon County officials to prepare for the possibility of flooding, both in Fernley and throughout the county.

Monday, after the worst of that flooding had receded, Fernley Mayor Roy Edgington praised the work of city staff, other county officials and departments, and residents for their response in helping people affected by the flood.

“A lot of people in the community stepped up and help neighbors,” Edgington said.

The city provided piles of sand and 3,000 bags at the Out of Town Park starting at 5 p.m. Friday for residents who were worried about potential flooding, but had run out of bags by 5:30 p.m. Saturday. With all of their vendors closed for the weekend, City Manager Daphne Hooper said the city was scrambling to get more bags, but Lyon County provided 4,000 more that were available by 8 p.m. Saturday.

“Lowe’s had six people out there helping people with sandbags,” Edgington said. “They’re not the only business that did, but that’s an example of the community involvement.”

The first signs of flooding began Saturday, and by Sunday night, city crews were forced to close several streets, including U.S. 95A and Sage St. while city crews tried to pump water off the roadways.

Edgington said the flooding in that area was made worse when a drainage ditch ruptured.

Edgington said some residents were angry to close streets into their neighborhoods.

“I know it’s an inconvenience for the people in the Sage area, but at the same time you can’t have people driving across water,” he said. “I just didn’t want anybody to go across there and get hurt.”

We’ve really got a good crew, and they do a good job over and over again,” Edgington said. “My only regret is not having enough equipment. I’d like to have another half dozen pumps and six or eight more employees. But they did a great job with what we have.”

Throughout the weekend, city employees monitored expected trouble spots, while beginning Saturday, the Truckee Carson Irrigation District provided 24-hour monitoring of the TCID canal, as well as Derby Dam and the Gilpin Spill, west of Fernley. With the Carson River side providing a sufficient water supply, TCID was able to shut down the drawing of water from the Truckee River.

Several residents reported a breach in the canal near Miller Road, where flood water rushing northward from the Sage Valley area eroded the bank and poured into the canal.

Edgington said things could have been much worse if not for the coordinated efforts led by the Emergency Operations Center set up by Page and the work by city employees. The sheriff’s office, each of the county’s fire chiefs, Lyon County’s public works department and road division, the Nevada Department of Transportation and South Lyon Medical Center were among the agencies participating in coordinating the emergency response.

“I think the coordinated effort and plans that were put in place by the Emergency Management team and Jeff Page, led the city to follow the same course,” Hooper said. “So we met with them and established our internal plan here what we’re going to do, and that helped.”

Even before flooding began, Lyon County declared a State of Emergency, which made the eligible for state and federal resources and aid.

“You can get resources marshalled and in place up front,” Edgington said.

Edgington spent much of the weekend driving around the city, and was at one point directing traffic, and at another spotted operating a pump to remove water from the roadway. However, he said, it was the city employees who deserve the credit for keeping the flood from becoming much worse,

“I think staff did an incredible job,” Edgington said. “I think it’s important that the public understand all the preparation. Now we’ve just got to clean up the retention ponds and get ready for the next one.”