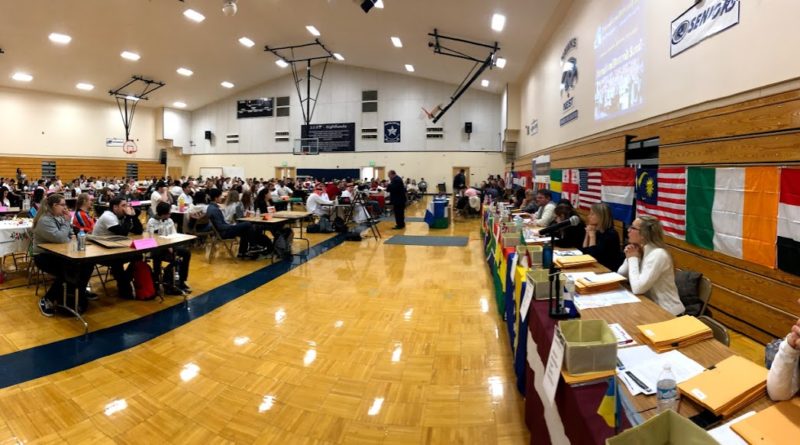 Economics, finance, technology, creativity, teamwork, problem solving, writing, speaking, debate and design… This only begins to explain the plethora of activities Lyon County School District’s economic students had been exploring in the semester leading up to and on the day of the International Economic Summit in LCSD.

The LCSD Summit is a part of the International Economic Summit Institute at Boise State University. The Summit has gained national recognition as one of the most effective educational programs available anywhere for teaching core, transferable career skills in economics, finance and even technology. Students gain a multicultural understanding of how the world works and what they can do to prepare through this world trade simulation.

Damon Etter, a former economics teacher at Dayton High School and now assistant principal at Dayton Intermediate School, introduced LCSD and DHS to the Summit in 2009. Etter participated in this year’s Summit alongside representatives from UNR Economics department as team USA. His classroom project, with the goal of becoming a district-wide event, has come to fruition and will hopefully only continue to grow as Yerington and Smith Valley High Schools seek to implement the program in their economics classes in the future.

Etter brought the Summit into his classroom because he believed international economics was a difficult subject to teach because of the disconnect without a real-world application.

Patrick Billings, teacher at Silver Stage High School, who is in his first year of teaching the Summit at SSHS agrees and states, “It was hard for many students to see the connections and the worldwide implications. Many have never left northern Nevada and have no geography prior knowledge.”

He continues, “The day of the summit was a huge success and it was awesome to see the engagement by most students.”

Etter said it is a “dream come true” to see the Summit become a district-wide event because he believes it truly benefits students and their understanding of the topics that an economics class addresses.

Stephanie Fitch, current economics teacher at DHS said, “I love that Summit has become a district event. This was Damon Etter’s vision when he brought the Economic Summit to LCSD. I am pleased I was able to keep the vision going until the rest of the district came on board. I’m very grateful to the LCSD leadership, both at District Office and the School Board, for supporting Economics as a separate class and for supporting the Summit. My hope is that all five high schools will be a part of the Summit from here on out. That would be amazing.”

The students, although likely exhausted after a day of solving the world’s problems, thoroughly appreciate that they can see a semester’s worth of hard work come together. Teachers and students alike, agree that the Summit is a fun and challenging project where student teams represent the countries of the world. They compete to raise the standard of living of their assigned country by applying their knowledge and skills in problem solving, international trade, finance, banking, debate, video production and even designing creative costumes and country displays.

“It was a lot of work, but it is neat that we are able to all come together in one location to play our world trade out. All of the topics we learned in our Economics class and then some were used in today’s event,” explained one student at the end of the Summit.

“The Summit helps kids in so many ways,” Fitch said. “First, and most obviously, it helps students truly understand Economics because they actually have to do Economics. Less obviously, students learn to manage time, partnerships, research and a huge project with many different parts and pieces. This year, we added the complexity of doing much of the Summit prep work online. Students had to learn how to create videos, upload information and track their progress online. So, not only do students learn content, they learn many soft skills they will need as adults.”

Billings, concurs and adds that “The day of the summit provides a lot of value with negotiating and talking to others, critical thinking skills, public speaking, etc. The economic proposal activity is very heavy on geography, politics and economics. These ideas are also taught in my Geography and Government classes.”

Jim Gianotti, Director of Secondary Curriculum and Instruction, who has spent countless hours working to make this district-wide Summit a reality concludes: “This was a huge project that took months of preparation. We had teachers participate in a number of trainings over the past year or so. A great deal of research and energy was put into this project and students had to work over Christmas Break to ensure that all the elements were completed. I believe in this project and it fits in well with the district’s push for more Project Based Learning in classrooms. The value is immeasurable. It did my heart a lot of good to watch students from three different high schools come together to compete and learn from each other. The amount of camaraderie and support that they showed for each other was amazing. Not to mention the amount of knowledge and their ability to think outside the box and apply what they had learned in class to this simulation. Students had to apply a great deal to ensure the success that they experienced. I look forward to many years of continued success and increased learning and passion for Economics and how these students fit into a global picture. Solving problems and working to make life better for others is something all of us should aspire towards, these are life lessons that can be applied outside the classroom.”