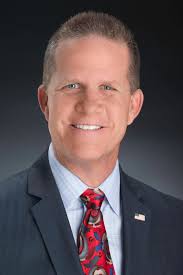 Nevada Lt. Gov. Mark Hutchison announced Friday that he will not seek reelection.

A Republican, Hutchison was elected in 2014, after being elected to the state Senate in 2012.

In his Friday announcement, Hutchison said serving at Lt. Governor was ne of the highest and most cherished honors of his life.

He thanked Gov. Brian Sandoval for recruiting him to run for Lt. Governor and for his integrity and leadership.

Hutchison said he will announce his future plans in the coming days.

The text of Hutchison’s statement is as follows:

“Serving as Nevada’s Lt. Governor is one of the highest and most cherished honors of my life,” said Lt. Governor Hutchison. “Thanks to a dedicated staff, we’ve served the needs of many Nevadans and expanded the scope and reach of the Lt. Governor’s office in meaningful and substantive ways.”

“I’m blessed with a large and growing family, which is deserving of more of my time and attention, as well as a large and growing law firm.  Therefore, the time is right for me to announce that I will not seek re-election in 2018.  I thank my outstanding staff members and the many state employees who have dedicated themselves to improving this state.  I also wish to thank Governor Sandoval who recruited me for this honor and set an example of integrity and leadership. And most importantly, I thank my fellow Nevadans who elected me and entrusted me with this office.  In the coming days I will announce what is next and how I plan to continue to contribute to our great state.”

A list of the Lt. Governor’s accomplishments can be found here.