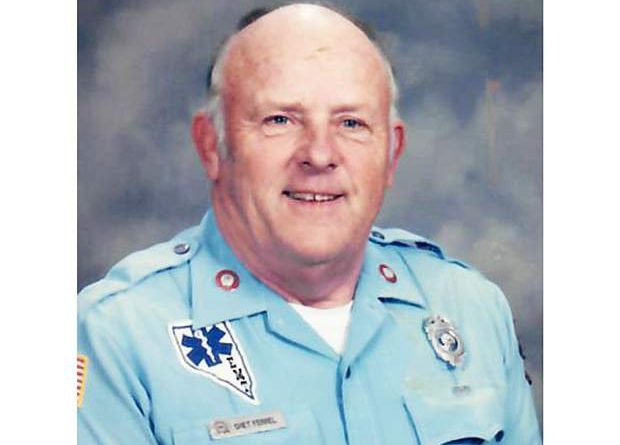 Chet was born to Veronica (Snyder) Ferrel and Edward Ferrel June 23, 1932 in Hawthorne, NV. He moved to Fallon, NV with his parents when he was 5 years old in 1937. He graduated from Churchill County High School in 1950.

He joined the U. S. Army in 1953 and served until 1955. He served overseas and then served two more years as a reserve in Nevada.

In 1955 he married his wife Mary Hamlin Ferrel, who passed in 2006. They had two children, a son Kwen and a daughter Erin.

Chet will be remembered for his many contributions to the Fernley community, which include being a longstanding member of the Fernley Volunteer Fire Department, serving on the North Lyon Fire Protection District for 50 years, Fernley Improvement Club, Fernley Chamber of Commerce, securing and developing parks and, along with Mary, rescuing the Fernley Depot.

Chet served on the fire board from 1958 until 2008. In 2008, he was presented with a 50-year plaque recognizing his Commitment and Dedicated Service to the Fernley Volunteer Fire Department.

In the early days of the Fernley Volunteer Fire Department, the emergency calls went through the Hanneman’s Service Station. Kris Hanneman would take the call and then call each individual volunteer and they would respond to the service station and she would meet them in her nightgown at night and give them explicit directions on how to get to the fire.

In 1968 he got his contractor’s license. He and his brother Roger founded Fernley Building Supply, and Chet and Mary operated their business until 1979. In 1983 he and his son Kwen started Ferrel Construction, where he continued to work, saying he never wanted to retire.

Chet’s obituary can be read here.